Why, oh why, aren’t HMRC doing what is really needed when it comes to data collection?

The government has issued a flood of new tax consultations, almost as if they wish to overwhelm the market and make sure only very limited numbers of comments are made. This was one of those launched yesterday: 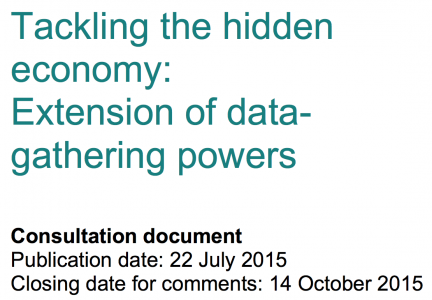 I do, of course, welcome an extension of data gathering powers. But I am bemused by the poverty of HMRC's ambition and the tangential nature of its targeting.

I know, as a matter of fact, that HMRC does not link bank account data with company data it holds.

I have shown that 400,000 companies disappear in the UK each year, many of which may well have had bank accounts, been trading and owed tax before doing so. I believe up to £11 billion in tax might be lost annually as a result, with all the usual caveats that this is, of course and estimate and the real figure may be larger or smaller.

I have had legislation presented to parliament to tackle this issue. That proposed that every UK bank must supply details of the beneficial ownership and directors of all the companies to whom they provided services, where they were located and what accounts the company had to ensure HMRC could get the best quality information on who was trading in the UK. It seems an obvious solution to a massive problem because it has inherent in it the means to follow up the problem if it is found to exist: the people to really tackle have been identified at the outset.

But that's not what HMRC is doing. Its plan is to legislate to extend access to two sorts of data to help tackle the hidden economy. These are:

1) Electronic payment providers – businesses that perform a similar function to merchant acquirers (credit card companies, in other words) by handling monetary transactions, but not necessarily in relation to credit and debit cards (increasingly these transactions are online and take different digital forms), and

2) Business intermediaries – which businesses can take many forms, including for example allowing customers to make orders, purchases or reservations, relating to goods, services or digital content. Again, these businesses increasingly operate on digital platforms.

Yes, that's fine and I can't say no to it. But why, oh why, aren't HMRC doing what is really needed and demanding the resources to make sure that they know the identity of every company trading in the UK, who is behind it and where it banks when I know they do not know that?