Not so much a pasty tax budget; more an outright disaster for millions

I always enjoy doing the Radio 2 budget commentary, but there's an implicit challenge in it. As has been the case for some years now Mark Littlewood and I walk into the studio with Jeremy Vine just as the Chancellor is sitting down and have to give an off the cuff reaction having only the speech to go on and having had no chance at all to see any of the notes. And, this being Radio 2, what's needed is a headline reaction.

On Wednesday my reaction was that this would be a budget that would significantly increase inequality, with some trophy baubles for the wealthiest, like inheritance tax reform, but swingeing cuts that would impact the most on the poorest - and this despite changes in the national minimum wage that I had only just heard.

The assessment was correct. For those who have not seen it this is the IFS distributional impact: 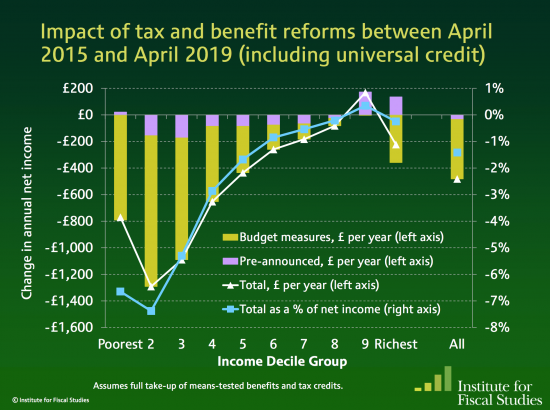 I am aware that the Treasury says this ignores free childcare and the impact of the increase in wages. I have two responses: first one cannot live off free childcare. Second, no one knows who will get the wage increases. For the under 25s they might be a disaster. For immigrant labour they might be great news. For 26 year olds they're almost certain to spell unemployment and poverty just as they might have the responsibilities of childcare arriving. So I don't always buy the IFS line on tax, but on this sort of thing they get the data right, and confirmed my on the spot analysis.

All that in turn also suggests that Martin Wolf is right when writing of this budget this morning in the FT, where he says:

Yes, the chancellor pulled off a political coup de théâtre. He also used adoption of the national living wage as a way to justify cuts in support for the working poor. Yet this is bad policy. It subverts careful economic analysis. It is a classic example of intrusive regulation. It fails to protect the bulk of the losers from cuts in tax credits. It will surely lead to a loss of jobs. And it will not do anything significant to reverse the UK’s failure to increases underlying productivity. Good politics do not necessarily lead to good policies. This is a case in point.

I am beginning to be quite strongly reminded of the March 2012 pasty tax. Osborne sat down that day thinking he's pulled off another coup. And it unravelled. There is, I admit, no pasty this time, but there is something much worse, and that's a core component at the heart of his supposed new political contract that just will not work.

You can't build national prosperity and foster poverty at the same time, but that's what Osborne's doing.

You can't tackle the issue of immigration and make the UK one of the most attractive destinations for migrant labour at the same time.

You can't build an economy on condemning the under 25s to low pay and living with their parents, knowing that at 25 they'll be priced out of a job by the up and coming 18 year olds.

You can't build productivity by forcing wages up and more into unemployment that you are unwilling to support.

You can't create a minimum wage and expect that it will be enforced when you don't supply the resources to do so.

You can't make such changes without consultation.

If you do you risk your strategy going wrong, very quickly.

This one will, I suspect. And it will be the poverty that it will expose millions of children too that will create that change. Mum's who can't feed their children eventually get very angry. I suspect they will when millions are to be punished in the way George Osborne plans for the simple fact of being amongst the poorest in the country.

Although, let's be candid, right now no one is offering much of an alternative.