The antidote to today’s euphoric messages

All Chancellors of all parties do, without exception, sing their own praises. It goes with the job. George Osborne will do it today. But here's the real tale of the UK economy, care of the Guardian: 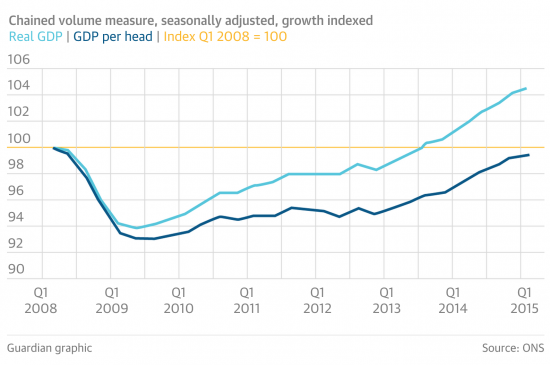 So far UK GDP per head has not recovered from the 2008 crash. Yes, it's improved of late - but that process is markedly slowing now - but we're still not where we were. And we are a massive distance from recovering the lost ground that almost every other economy is now making good on.

What's the big difference? Austerity, of course. The periods of good news in this graph are 2009 - 2010, when Labour sought growth, and 2013 on when George Osborne turned off austerity but not the austerity rhetoric. If he now turns the reality of austerity back on again we will, inevitably, see GDP growth fall back. That has to be the case. If the government cuts spending and no one else increases it (and there's no sign anyone else is really willing to do so) GDP cannot increase and could fall.