The tragedy of Greek debt

I don't know who created this image for the BBC on Greek debt but they hit the nail on the head: 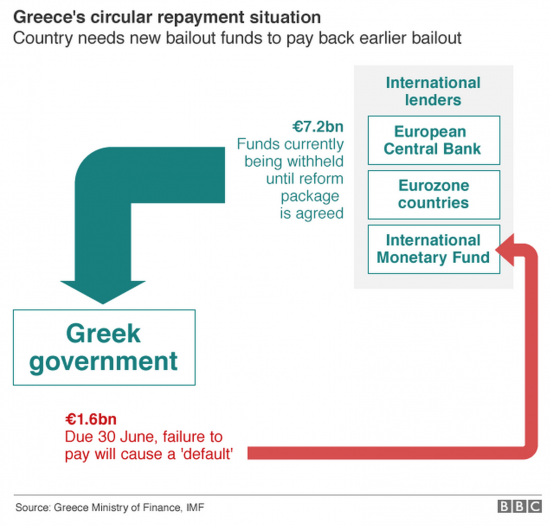 The Greek debt default that is threatened will happen because the three main lenders - the IMF, ECB and Eurozone countries - will not lend the money needed to let Greece pay the IMF.

Let me be clear: no one ever thought that Greece would pay the IMF itself. It can't. So a game is being played by the creditors here.

The game is that of the bully. Bullies make their victims pay for the bully's mistakes. Greece should never have been lent the money advanced  to it by commercial banks, whose debt has now been bailed out by the ECB and others. But they did make these loans and for that Greeks have been enormously punished with their economy trashed and mass unemployment and desperate enormous hardship, all to save the face of bankers.

That is the game that is still ongoing.

And in all this the Greeks and their democratic rights are being ignored and the bankers of other countries, and especially Germany, are instead being treated as the aggrieved when it was their own errors, for which they should be accountable and for which they should pay the price, that caused this crisis. That was because the Greeks could not have borrowed if those banks had not made the funds available in pursuit of their own gain.

No one knows what will happen in Greece yet. But remember the EU is currently printing €1 trillion to keep its banks solvent, interest rates low and boost economies. But it has deliberately excluded Greece, whose debts are utterly insignificant in the context of these sums, from this scheme. Again, that is the politics of punishment. It also shows that this whole crisis is manufactured and wholly artificial.

It is a game bankers are playing to show who us who is in control.

It is a ruse to show that debt is above democracy.

It is a device to show that states must bow to banks.

It is contrived to show people matter less than money.

Remember all that, whatever the outcome.

And remember that all that is being argued about is whether the IMF will or will not, in effect, pay itself, but that this is being used to seek to destroy a legitimate government and its people.