As the Guardian has reported this morning, the International Labour Organisation has issued a new report whose finding is that only one in four people seeking work achieve the goal of secure employment. The Guardian summarises their results with reference to an ILO chart as follows: 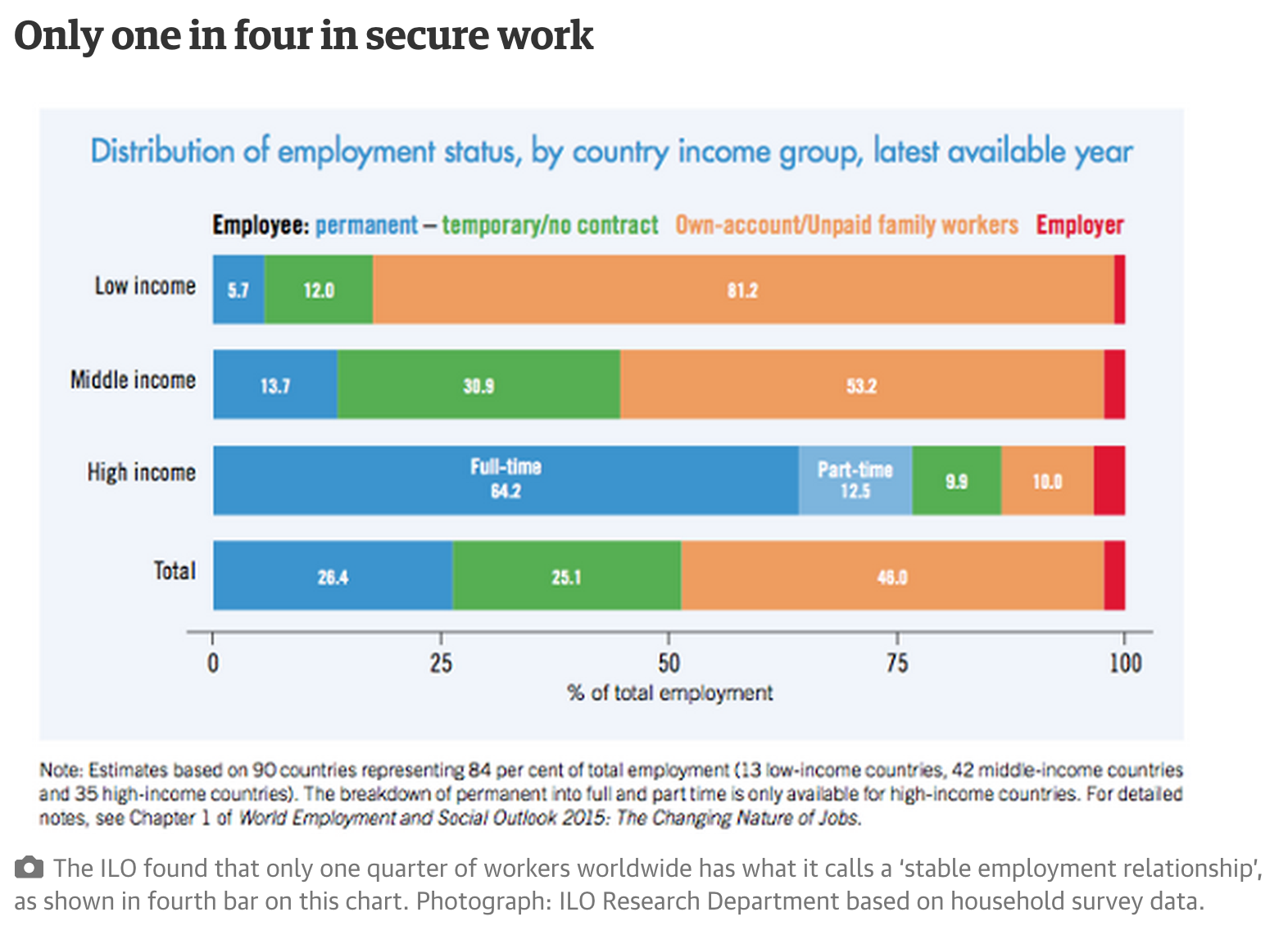 The trend towards temporary and self employed work is growing. This is important, but perhaps most importantly because the lens through which this issue is being viewed is wrong, in my opinion. The International Labour Organisation is looking at this as a work issue. And of course, to some degree, it is. But it has also to be viewed, at least as appropriately, as a business issue.

Anyone who is self employed is in business.

Many of these on temporary contracts are in pretty much the same position: they just have one short term predominant customer.

Such people are not just suppliers of labour though; many will also be suppliers of capital. Some of that capital will be tangible. Some will be knowledge or human capital: in the current economy the difference is largely semantic when it comes to relevance.

The fact is that what this report says is that at least 46% of the people engaged in economic activity in the world are in business  on their own account. It is only one in six in the UK, rising to maybe quarter when those on temporary contracts are considered. But this is important for several reasons.

First, in the context of this blog, unless we know how to tax the self employed we can't tax this effort appropriately. It's as blunt as that.

Second, given the higher rates of prevalence of tax evasion amongst the self employed than amongst employees this trend has implications for tax gaps, the imposition of tax and the size of the state (it will not be coincidence that states with higher employment rates have larger government sectors).

But third, and perhaps most significantly, this perception changes the whole rhetoric about wealth creation. How can the wealth creators be those working on very highly paid employed contracts with guaranteed bonuses when they are the most removed from risk? Surely they are the furthest removed from being described as business people in this world view? Where is their down side? For all practical purposes there is none: even their futures are guaranteed through pensions that provide security to them and their families, come what may.

Don't get me wrong: I am not saying these people do not have abilities: they do. But so too does the person who has to provide for a family with no security at all where all their ingenuity has to be brought into play precisely because there is no guaranteed outcome, whatsoever.

If business is characterised by risk taking (and by and large it is) who are the real business people? And who are the wealth extractors? The question is genuine because the answer is so important to our economies, our politics and our tax systems, where the taxation of rents has traditionally been accepted at higher rates. And I think we have that answer wrong. It is the self employed and the temporary workers who are the real wealth creators almost precisely because they are the main repository of risk within the world economy.

And if that's right then when someone wants to talk to business people the self employed have to be at the table.

And when someone wants to get tax for business right they are the main people to consider.

It's a big issue. It's one I need to give some more attention because it is some time since I wrote this, which was my last major foray on the issue.

And why does it matter? Because these people could decide elections, and so tax systems, and so the shape of society. That's why.