The stakes are at their highest sometime next weekend

It seems that come what may we will have a hung parliament on Friday.

The constitutional position in the event of a hung parliament seems clear. The prime minister can remain in office if there is no clear election result until it is obvious that he cannot command a majority in the Commons, when he must resign. The parliament website puts it like this when discussing this issue:

The Prime Minister only has to resign if it is clear that they cannot command a majority of the House of Commons on votes of confidence or supply. This would be the case if the incumbent government fails to make a deal with one or more of the other parties, or if they lose a confidence motion in the House of Commons. The first parliamentary test would be the vote on any amendment to the Queen’s Speech.

Reports have it that Cameron intends to hang on in office even if the odds are stacked against him as at present they are. This is today's summary of election forecasts as produced by the FT, who appear to have used one of the more pro-Tory methodologies: 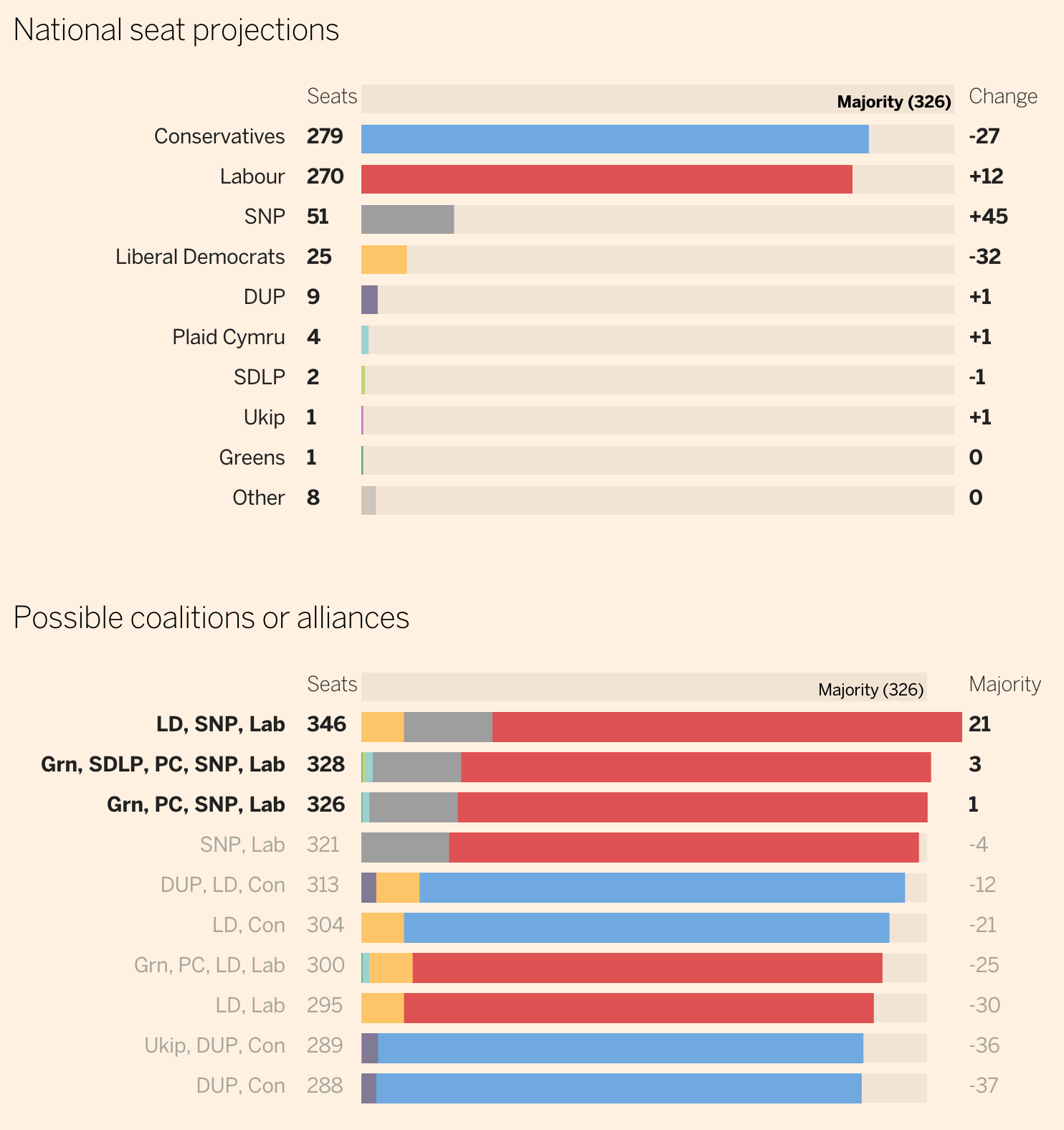 What is clear is that at present it is very unlikely that on the logic presented by the parliament web site David Cameron could form a government. There appear to be three possible reasons why he might be assuming he can do so in that case.

The first might be a believe that if the Conservatives have most seats then Labour must let them form a government because they will have won even though there is not a shred of constitutional or parliamentary logic to that claim.

Alternatively he wants to force a Labour / SNP combined vote against him so the Conservatives can appeal to an English nationalist vote in future.

Or, thirdly, he think Labour might let them do so because it will not seek the support of the SNP come what may.

I can see no other reasons why if anything like the above outcome occurs David Cameron will seek to stay in office when it is clear that the Scottish Nationalists, Greens, SDLP and Plaid Cymru all oppose any government he might form.

This does, though suggest several further trains of thought.

The first is that if David Cameron seeks to stay in office in that situation he clearly will have no regard for parliamentary democracy and the conventions by which it works in this country.

Secondly, if he hangs on for the second reason he would underline his contempt for both the choice of the Scottish electorate and the Union.

But what of the third option? Is it possible that Labour might really refuse to oppose him? Does he really think that? Has he really got information that suggests that this might be the case?

I can't see the electorate forgiving Cameron and the Tories hanging on if it was obvious he had no chance of forming a successful government. But what if Labour let him form a minority administration because they would not work with the SNP? What then?

Let me put this in context: remember there is nothing Labour can do to stop Scotland having another referendum if it really wants one and the SNP sweep the board in 2016 in elections in Scotland on that basis. So, to put it bluntly, refusing to work with the SNP now is a totally futile gesture on their part.

In that case refusing to work with the SNP to oppose a continued Coalition government would mean that Labour would suggest that a futile gesture was more important than saving the NHS, ending the bedroom, saving social security, rebuilding the economy, providing housing and so much more. I can see no one forgiving them for that.

So the Conservatives face meltdown if they try to hang on and Labour faces it if they let them do so. But in all this Labour holds the trump card because it could form a  government with a good chance of passing a Queen's speech, which no one else good. If it fails to take the chance, or even fails to force that chance onto the agenda, it will cease to be a political force worth considering, just as the LibDems and Conservatives know that they too might face oblivion if they cannot form a government together.

To say the stakes are high for everyone but the Scottish Nationalists massively understates the realities of next weekend.

I am almost looking forward to it.