Having discussed my fears about majority Labour and Conservative government's, and about the role of nationalism in the 2015 election let me consider the difficult issue of coalition.

Let's be candid: only the wildest optimist now thinks we are not going to have coalition government after May 7. First past the post will, once again, fail to deliver on its promise of majority government, which may be the issue for another blog. For now let's accept the fact that if we are to have a government it will be some sort of coalition.

Of course it may not name itself as such. The FT's summary of election forecasts is more pro-Tory than most and looks like this: 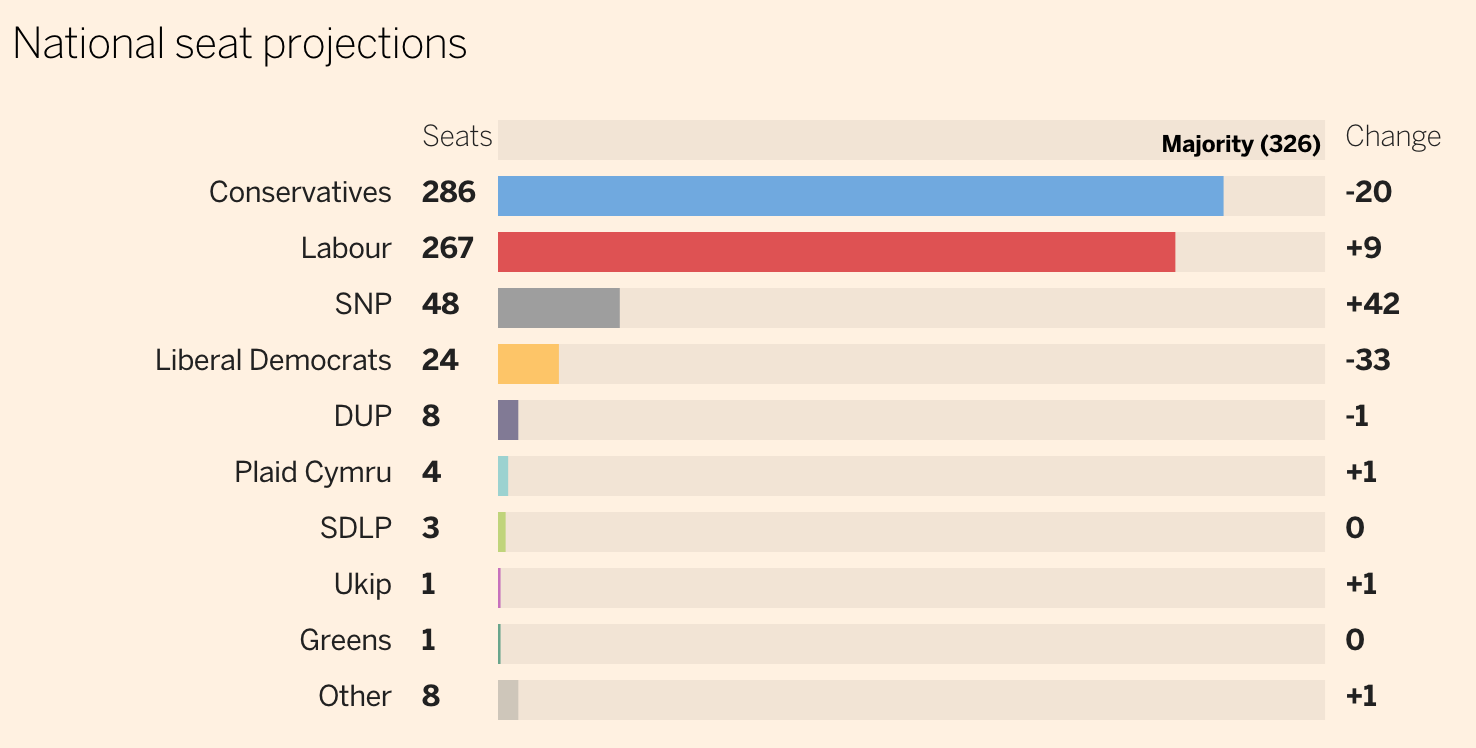 The Guardian's is more middle ground and has this: 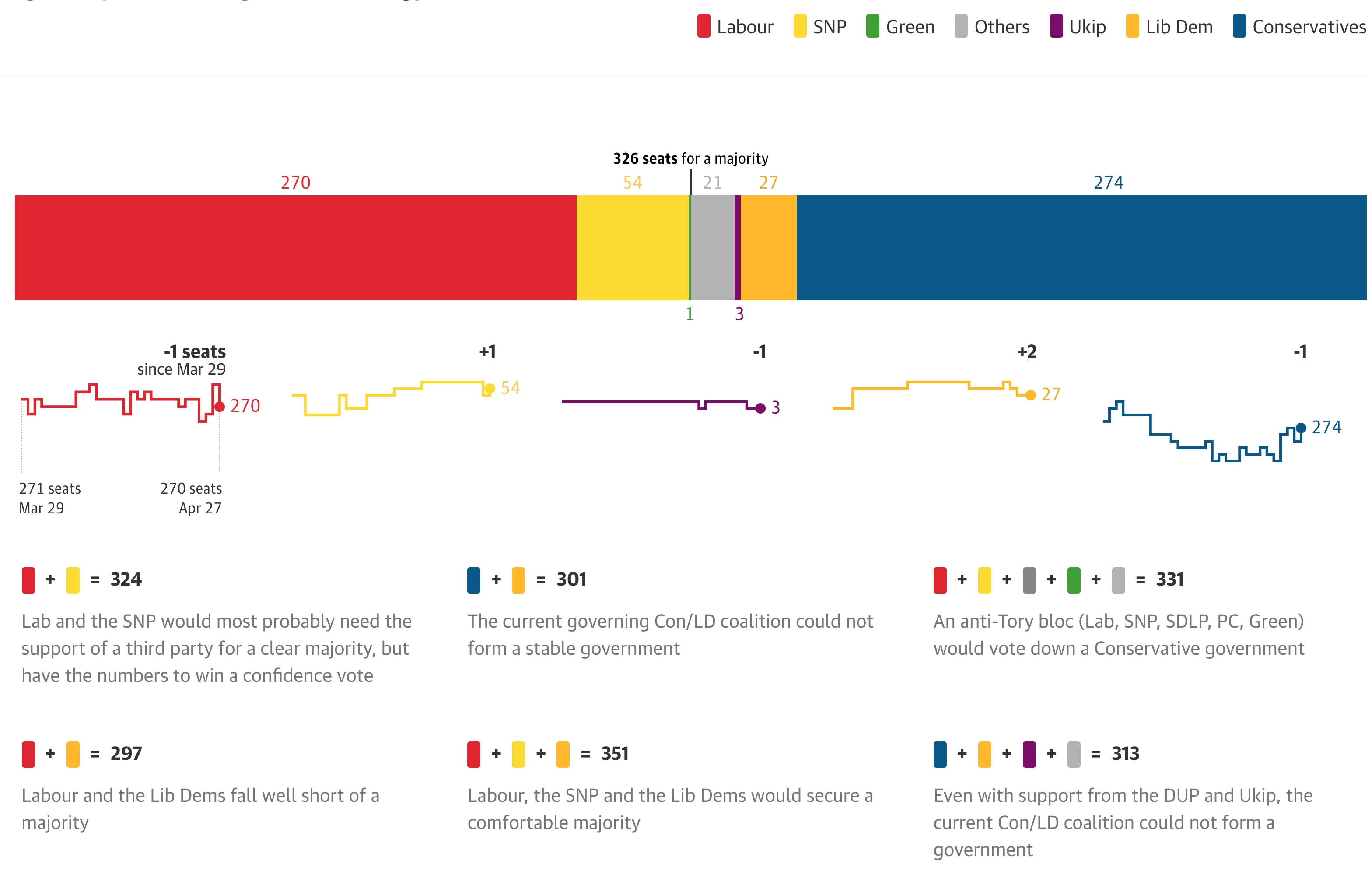 Neither need indicate the actual outcome, of course. But assuming they might be in the right area the more pro-Conservative FT forecasts still assembles the options in this fashion: 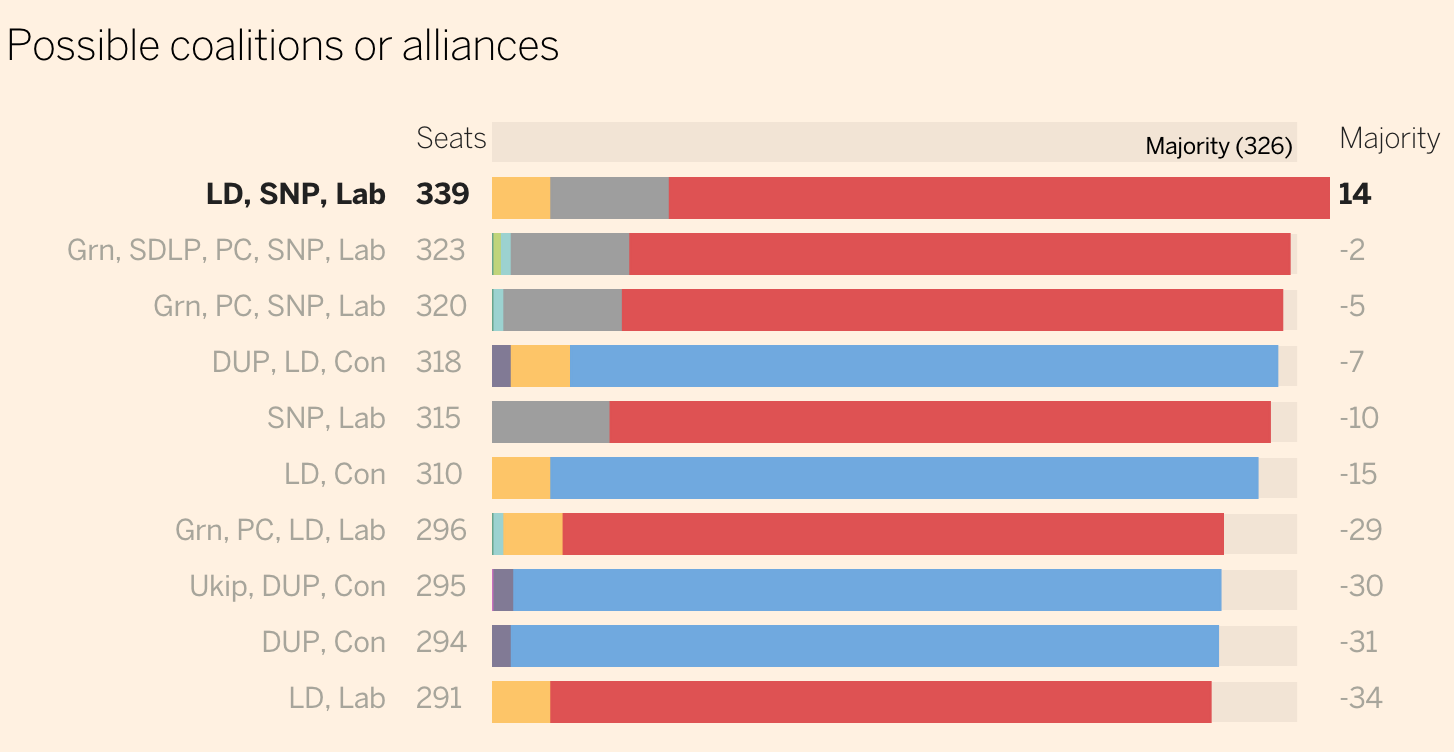 Curiously, that offers one option of majority government, and that from an alliance currently ruled out by all involved. In truth I do not take anything as said right now on this issue as being reliable: the need to form a government after 7 May will over-rule election posturing before it.

That said though, the fact is that the likely SNP result and its outright opposition to a Conservative led government, which I think is genuine, means any Tory option for forming a government looks uncomfortable (the Liberals and DUP would make weird bed-fellows) and so Labour still looks to have best chance of forming a government after this election. With Green, Plaid and SDLP support, and assuming all the rest of the parties voted consistently against Labour, which may not be true, this rainbow coalition if entirely plausible partners could support a government since in practice 9 MPOs will not be voting in the next House of Commons (five from Sinn Fein, who do not take their seats, and the four in the Speaker's team) and so 322 represents a majority, if one is needed. I remain of the view, as most commentators do, that this, then, is the most likely outcome.

But there are problems and it would be wise to acknowledge them.

The first of these that I very much doubt that the SNP will enter a coalition. So a minority government is possible. I remember such a government in the lat 70s. It was not a great experience and it cost Labour dear. It is hard enough holding political parties together in government. It can be harder still in minority situations were dissent is difficult to express. The demand for loyalty across the spectrum of interests that labour represents will be tough in this situation. I suspect that the Fixed Term Parliament Act will see much more use than anyone expected as a consequence with votes of confidence becoming a tedious part of the scene with the fate of the government depending upon the chance of literally wheeling members in on hospital beds to vote on occasion.

Second, this then raises the ugly issue of what happens if the LibDems and Tories could forma  coalition with considerably more seats than Labour but could not pass a Queen's Speech when Labour could. Would such a government be acceptable? The technical answer has to be yes, of course. We elect members of parliament and not parties when casting a vote at constituency level  and as such it is, at least technically, only the number of votes of individual MPs that matter when it comes to controlling the House of Commons. In that case a loose alliance could, quite legitimately, outvote a more formal coalition.  The question to be asked though is whether or not this would be acceptable to people in the country? The obvious response is that if it is not then the case for electoral reform is made because if this is true then the constituency basis of politics has disappeared and larger constituencies with voting on the basis of party lists would most closely reflect people's opinion of how the electoral system should work. But, would anyone go that far?  I think that a potential constitutional crisis around this issue is a very real prospect during the next Parliament.

A third, and quite genuine concern,  is that if a minority party were to govern the pool of talent from which ministers might be drawn is relatively small. This worries me: it looks quite likely that Labour will lose a number of its more experienced MPs in Scotland as a result of the popularity of the SNP.  This will only exacerbate the problems of forming a government from what will be the smallest grouping of MPs that might have ever sought to do so.  Given the scale of the problems that will be faced there is an obvious question to ask, which is whether or not the resulting team will have the necessary experience to deliver effective government?

Not wholly unrelated to this question is that of the House of Lords.  I have already discussed on this blog the problem is its current  membership will pose for any minority Labour government.  It is not unreasonable to think  that Labour might need another 125 peers to ensure that it can regularly pass legislation approved by the House of  Commons. There is, of course, the backstop of the Parliament Act to rely on,  but  when Parliamentary management will already be decidedly complicated to reply upon the arcane procedures in this Act to pass legislation  could make effective government nigh on impossible.  I suspect that a flood of new peers is likely post the election. This may provide Labour with the ministers it needs, but will not help the legitimacy of any government. And it will swell the ranks of the already bloated Lords giving rise to a demand for more reform there as well.

The House of Commons  may also need reform.  Many of its structures are designed to make the life of a majority government much easier by  devolving powers that should belong to the House to the Executive, safe in the knowledge that for a long time the Executive could always get its way in a parliamentary vote.  So, for example, it is a current House of Commons rule  that no one but the government shall propose a taxation measure. With minority government this may be unacceptable. The time to be allocated to reviewing government spending plans may also have to be significantly increased if, for example, the SNP is to hold a Labour government's feet to the fire, as it says it will.  This will, however, require changes to House of Commons Standing Orders and a rewrite the precedent book. Can a minority government survive in the face of such challenges?

And in amongst all that  is the almost inevitable complication that a new SNP government in Scotland will, after 2016,  hold another referendum on independence with a likelihood,  at least on current preferences, for a Yes  vote on this occasion.

What, in that case, would happen if it was then decided that electoral reform was essential in the rest of the UK, as would seem logical and desirable in that case? Could that be carried, especially without Scottish votes?

If anyone thinks any government is in for an easy time post 7 May, think again. Just at a constitutional level  the issues to be faced are complicated, at best.  We will be, as the proverb says, be living in interesting times.