Seven Conservative claims that Labour should have nailed long ago

This is a guest post by David Cobham, who is professor of economics at Heriot-Watt University, Edinburgh. He co-edited the ‘Economic record of the 1997-2010 Labour government’ issue of the Oxford Review of Economic Policy, spring 2013, and is co-organiser of the www.coalitioneconomics.org website, on which a companion pice on Monetary Policy Under the Coalition is published this morning:

No, the crisis was essentially international, that is US, in origin, but spread abroad mainly via other countries’ banks’ purchases of the asset-backed securities into which US sub-prime lending contracts had been bundled.

Poor regulation was certainly involved but most of the deregulation in the UK had been done under Thatcher and Major, and the Labour government was typically accused of being too strict rather than too lax by the Conservative opposition. If only Cameron and Osborne had gone around in 2005 clamouring for more regulation!

No, the evidence suggests that the Labour government may have allowed a slightly stronger rise in spending relative to GDP than might have been desirable in the mid-2000s, but this was not a large rise and in any case it was not a factor in the causation of the crisis.

No, neither the budget deficit nor the stock of debt outstanding (relative to GDP) were particularly or dangerously high before the crisis; the deficit rose after the crisis struck, partly because the Labour government did some limited fiscal stimulus (especially the temporary cut in VAT over 2009) but mainly because income and corporate tax revenues coming from the financial sector fell sharply from the crisis; in any case, fiscal stimulus — along with monetary stimulus, which started under Labour but which the Conservatives have tried to intensify — is a normal and sensible response to a once-in-a-generation crisis. Under Labour the UK led the world through the G20 in responding to the crisis, and the fiscal and monetary stimulus carried out in the US (but in the former case aborted by the Coalition in the UK) is one of the principal reasons why the recession has been so much less deep and less long in the US than in the UK, see Figure 1. 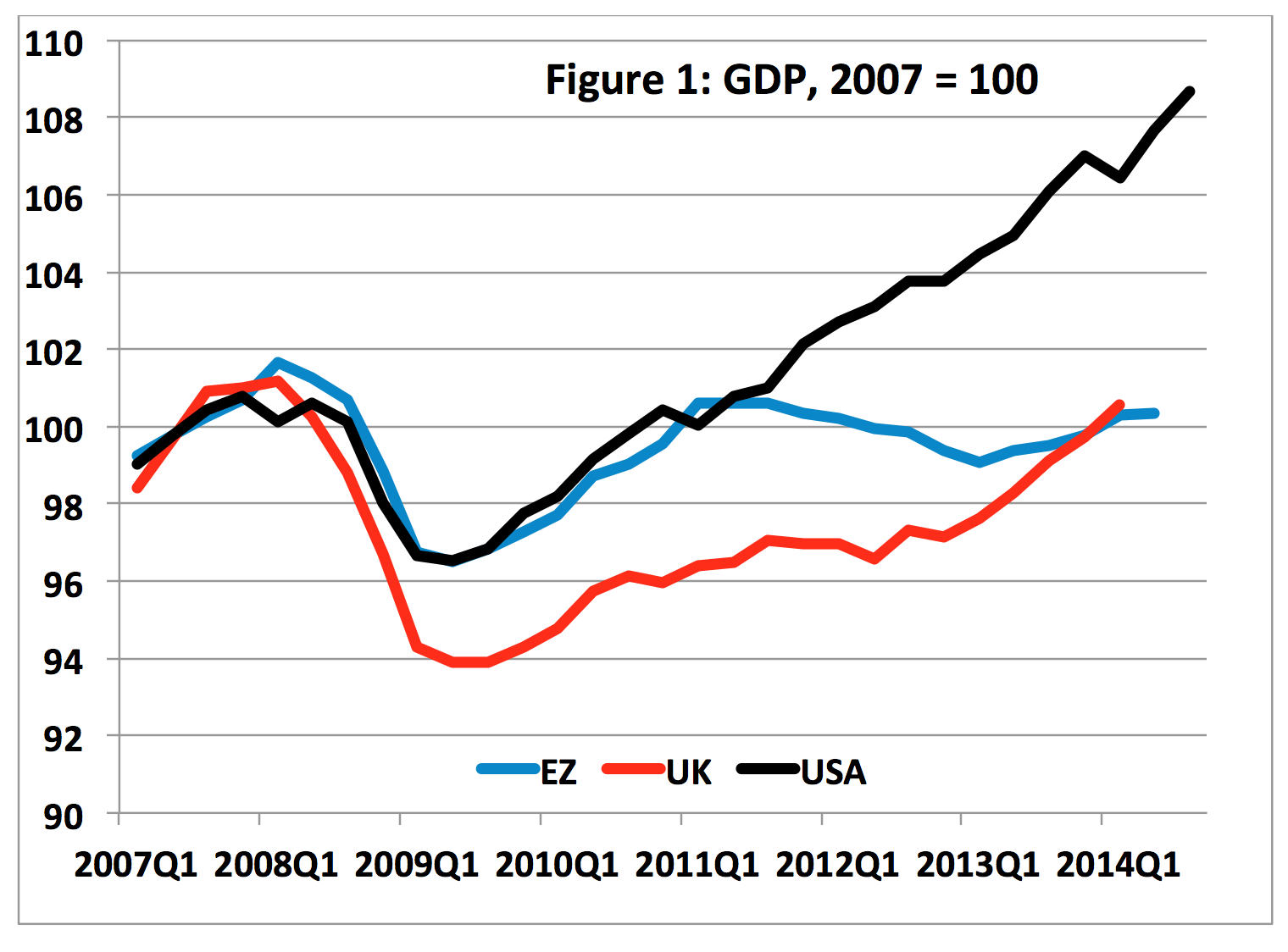 No, there was no need for immediate fiscal consolidation, that should have come after the economy had had a chance to recover; consolidation was not required to prevent a Greece scenario, which was never plausible for the UK (with, for example, the much longer maturity of its debt, its better tax administration and the much lower starting point for the size of its debt), nor was it required by the government’s new fiscal rules (which excluded capital expenditure); instead the Coalition’s fiscal austerity knocked the nascent recovery in 2010 on its head.

No, the recovery has been exceptionally slow and partial, with the living standards of much of the population seriously depressed (and not yet restored); the recovery such as it is is due mainly to (a) Osborne’s decision in 2012 to go slow on his fiscal consolidation plans, and (b) the slow and imperfect self-adjustment processes that can be expected of a squeezed market economy, together with (c) some small effects from the monetary expansion that the government desperately sought to engineer (via Funding for Lending, Help to Buy and Forward Guidance); and the fall in unemployment (in many cases into part-time and insecure employment) is in part the result of welfare cuts and pressures that ‘starve people back into work’ in lousy conditions.

No, the current recovery in the UK is slower than previous recoveries; almost none of the ‘rebalancing’ which the economy needs and the Coalition said it would bring about has occurred; and the recovery is associated with a much worse productivity performance since the crisis than other members of the G7: employment has increased but it is not generating the output which it should nor paying the wages which people want and deserve.