Kelloggs and the pervasiveness of tax avoidance

The Sunday Times reported yesterday that Kelloggs had said in its annual report that:

Tax matters, including changes in tax rates, disagreements with taxing authorities and imposition of new taxes could impact our results of operations and financial condition.

The Company is subject to taxes in the U.S. and numerous foreign jurisdictions where the Company’s subsidiaries are organized. Due to economic and political conditions, tax rates in various foreign jurisdictions may be subject to significant change. The future effective tax rate could be effected by changes in mix of earnings in countries with differing statutory tax rates, changes in valuation of deferred tax asset and liabilities, or changes in tax laws or their interpretation which includes possible U.S. tax reform and contemplated changes in the UK and other countries of long-standing tax principles if finalized and adopted could have a material impact on our income tax expense and deferred tax balances.

We are also subject to regular reviews, examinations and audits by the Internal Revenue Service and other taxing authorities with respect to taxes inside and outside of the U.S. Although we believe our tax estimates are reasonable, if a taxing authority disagrees with the positions we have taken, we could face additional tax liability, including interest and 8 penalties. There can be no assurance that payment of such additional amounts upon final adjudication of any disputes will not have a material impact on our results of operations and financial position.

The cash we generate outside the U.S. is principally to be used to fund our international development. If the funds generated by our U.S. business are not sufficient to meet our need for cash in the U.S., we may need to repatriate a portion of our future international earnings to the U.S. Such international earnings would be subject to U.S. tax which could cause our worldwide effective tax rate to increase.

We also need to comply with new, evolving or revised tax laws and regulations. The enactment of or increases in tariffs, including value added tax, or other changes in the application of existing taxes, in markets in which we are currently active, or may be active in the future, or on specific products that we sell or with which our products compete, may have an adverse effect on our business or on our results of operations.

As far as anyone knows Kelloggs are the first company to say that the OECD rule changes will impact it. I do not think that the reference to the UK was explicitly to the Google Tax, as it is called, but it may be.

It was enough to get me to take a look at Kelloggs. Ruth Sunderland has done a good summary in the Mail on how the group works and as is obvious from the article I did speak to her. As she notes:

Kellogg’s has produced cereals in the UK since 1938, and says it has several hundred employees here.

It sells in the UK through two main subsidiaries owned by Irish-based Kellogg Europe Trading Ltd. One is Kellogg Marketing & Sales, which distributes breakfast food for Irish and Swiss-registered companies, and reported sales of £622million to Britons in 2013.

The second, Kellogg Company of Great Britain, makes cereals under contract for an Irish-based operation.

But this £210,000 and the £8.4million were offset by an £11.8million tax credit at another UK-registered operation, Kellogg Group Ltd.

I actually think, based on accounts, that 1,061 people make cereal in the UK and 321 are involved in the UK based sales and marketing operation. A summary of the accounts of all the above companies is as follows (click on it to enlarge):

There may be more UK companies than shown here: I am not suggesting this is a comprehensive review. Unfortunately the UK parent company for Kelloggs, imaginatively called Kellogg UK Holding Company Limited, has a statement in its accounts which says:

So we have no UK consolidated result on which to base any evidence. There is significant opacity here, and that can only be deliberate, even if entirely legal.

But what we do have are three things. The first is evidence that there is an Irish engagement in the Kellogg operation. Secondly we have evidence of  Luxembourg involvement and third there appears to be little tax paid, about which Kellogg now have concern because they think this might change.

If I put that altogether what appears to be happening is that the Kellogg Company of Great Britain is making cereals in the UK under licence for an Irish operation, Kellogg Europe Trading Limited. The sales were not more than £139 million.

So sales of about £510 million were made to the UK from this Irish operation. We know what the company does from the description of what its employees do:

The balance sheet makes it look very unlikely that this company manufactures anything: it is a logistics company.

The UK sales operation says this of itself: 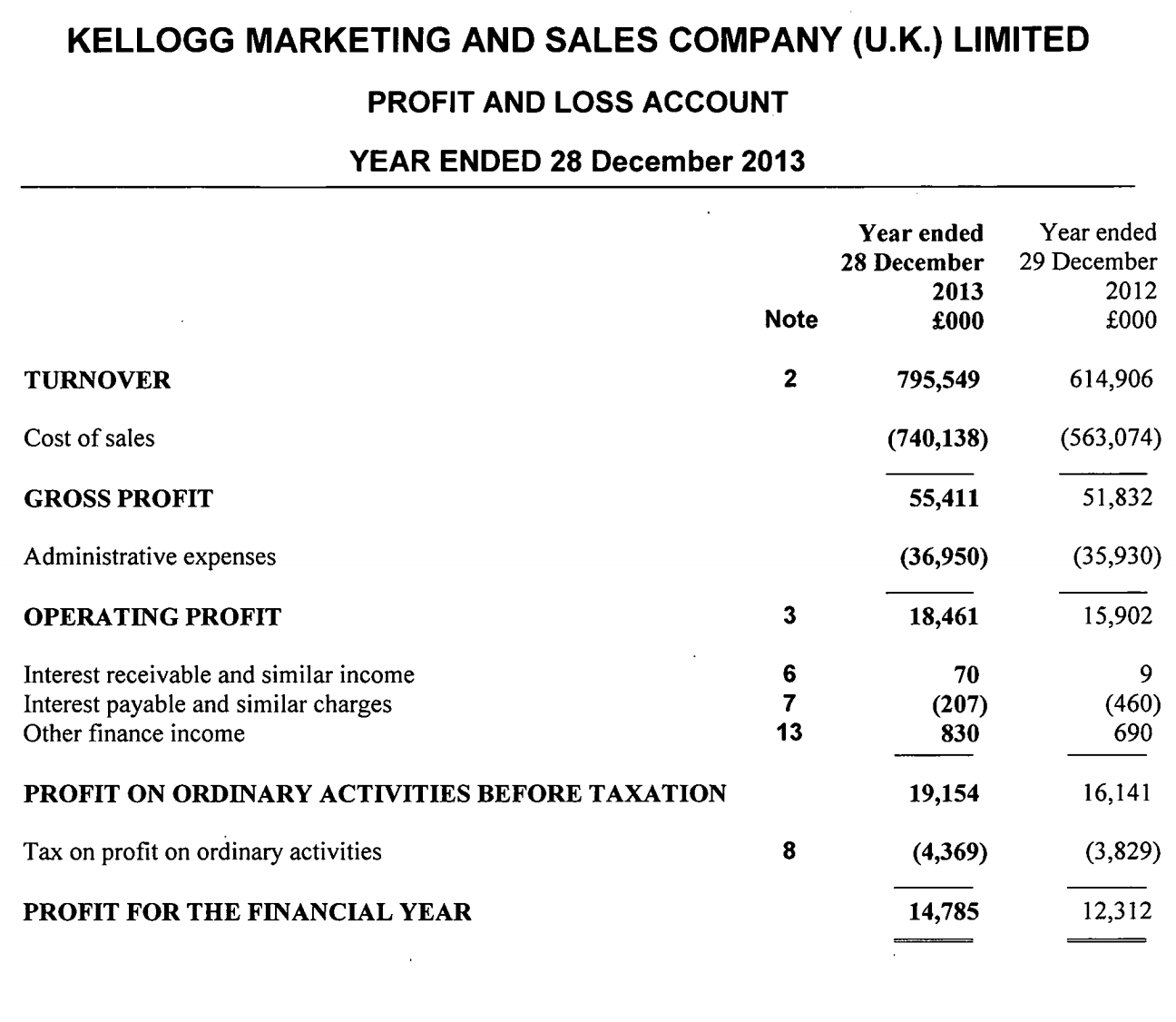 The sales note to its accounts says: 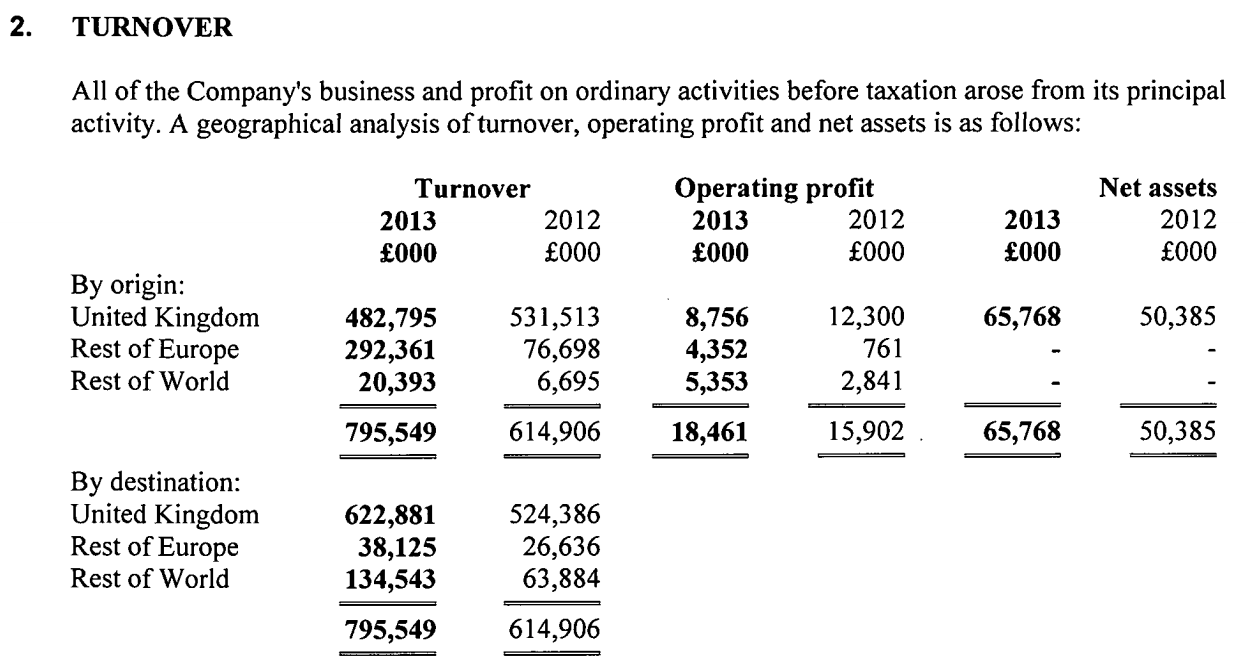 So, some £622 million of sales were made in the UK with relatively low margins made. As is clear from the notes to the accounts this appears to include sales sourced from the Irish company that may have been worth £510 million at cost value.

Somewhere this sum must include the value of output from the UK  manufacturing operation. Whether this is routed via Ireland to return to the UK (on paper at least) is not clear. The possibility appears to exist. 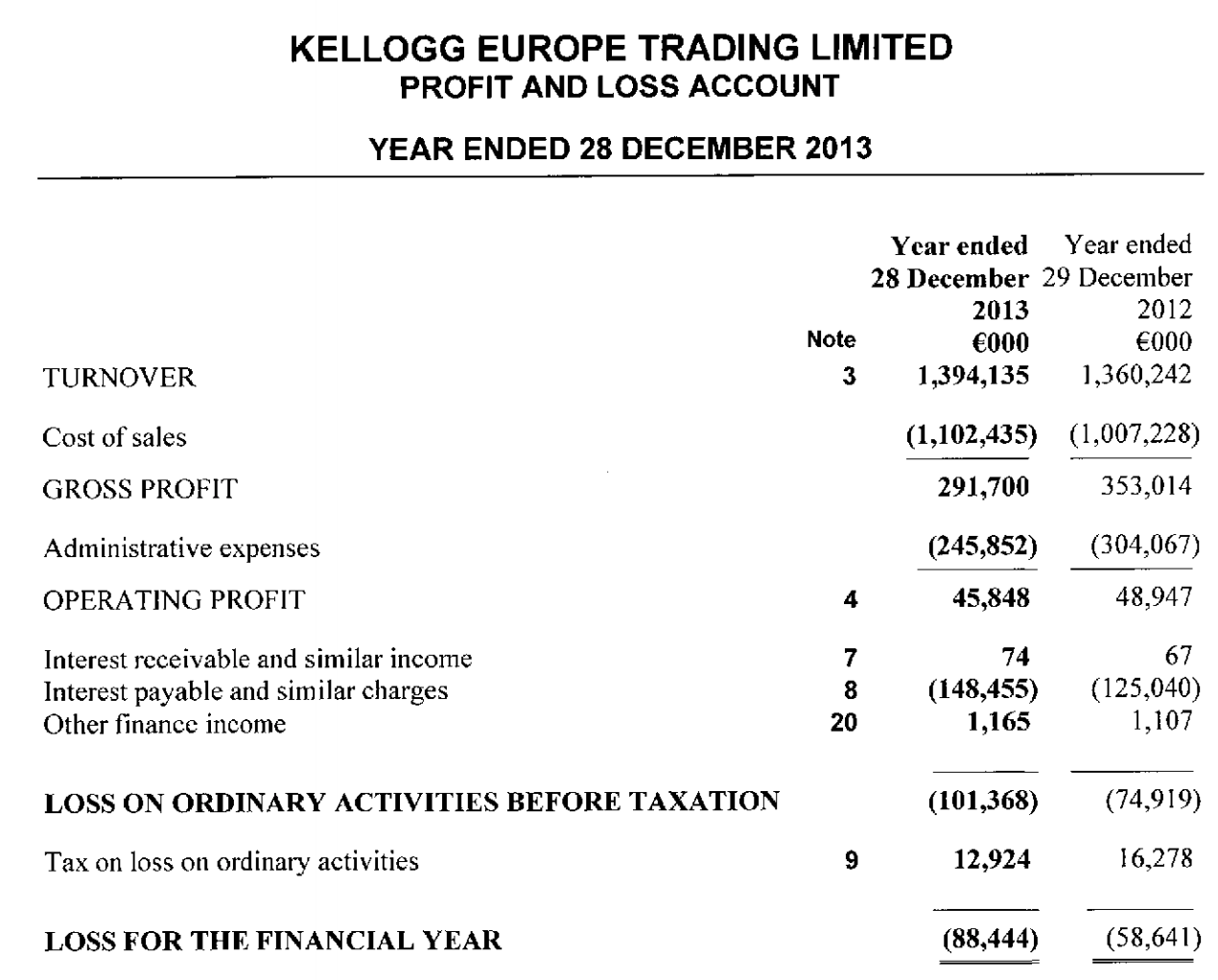 The operating margin here is 3.3%. But then â‚¬148 million is paid in interest at rates of up to 8%, settled in euros and likely (but not stated) to be due to Luxembourg as a result.

Since much of the Irish operation's profits appear to be derived from the UK it is fair to think that some of this payment, at the very least, is made out of the proceeds of UK sales.

So, what is happening? First, and I stress, because of the opacity of the accounts we do not really know. I suspect Kellogg's greatest fear is country-by-country reporting: then we would see what is happening. That is what it is meant to show and the tax savings that opacity facilitates is what it is targeted at. This is the tax reform in the UK to which I think Kellogg refer and not the Google tax. Companies like Kellogg have a lot to fear from country-by-country reporting.

Third, it looks likely that the UK made cereals end up having a lot of value added to them as a result of such processes before they reach the customer.

Fourth, if Ireland is central to this, then so is Luxembourg, where we know tax rates are exceptionally low. I accept that it appears that losses are being incurred as a result, but what is noted here is not the full story, as I stressed at the start.

So what can be concluded? I think it fair to say that Kellogg is structured very much like a classic US owned IT company with Ireland as a hub for supply chain management and Luxembourg for managing financial structuring and inward investment. That can only be explained by a tax avoidance motive. And what we know is that this goal is sufficiently key to the Kellogg operation  that the OECD Base Erosion and Profits Shifting processes may challenge it in future.

Reflect on that over your Cornflakes.