An accountant’s vision of Britain

Will Hutton said in the Observer yesterday:

Campaigning on the doorstep for less debt is hardly the stuff to win hearts and minds. It is an accountant’s vision of Britain — and people know in their gut that much more needs to happen to stimulate jobs, opportunity and the good life.

He's right, of course. And we should recall that accountants know the price of everything and the value of nothing.

I, as an accountant, plead a little guilty to the charge that I have fuelled this debate. Ann Pettifor certainty thinks I have. Her argument is that all the debate on tax is the flip side pf the deficit debate. Well you have to disagree with friends sometimes, and Ann  is wrong here: my whole reason for raising tax issues is to emphasis how tax empowers possibility.

As a result I am closer to Will Hutton on this issue. The mistake is to view the state as a technical residual when it comes to debate on the economy and broader political issues. The mistake has been to allow this libertarian view to gain ground.

But the real mistake has been to fail to point out that this is just wrong. I am grateful to Frances Coppola for drawing my attention to this graph on the OBR budget report from last week: 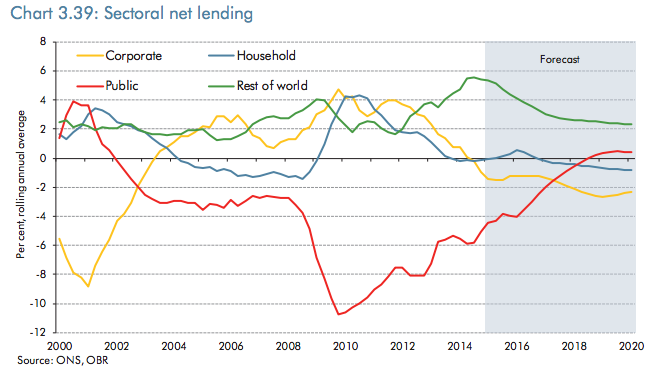 As I have often said here, accounting has a little acknowledged role in macroeconomics. That is. accounting provides an identity that must hold true, which is that there are just four essential components in any economy, which are household consumption, business investment, net exports and government spending. They will always, in net terms, add to zero when it comes to current surpluses / deficits: that simply has to be as the double entry demands it.

So, if the government is to go into surplus as Osborne demands then someone has to go into deficit. That, the OBR reckons, will be business in a big way, households in a smaller way (both by borrowing) and by trade deficits reducing. These are accounting necessities for Osborne to be right.

Candidly, I see no reason why the UK;s current record trade deficits will change any time soon, because nothing is happening to change them. So I do not believe that assumption.

I accept that households may borrow more over coming years. That will be because of pension net dis-saving (which is what pension reform is really about). So, some shift here is possible.

But where credibility falls off the scale is in this OBR graph: 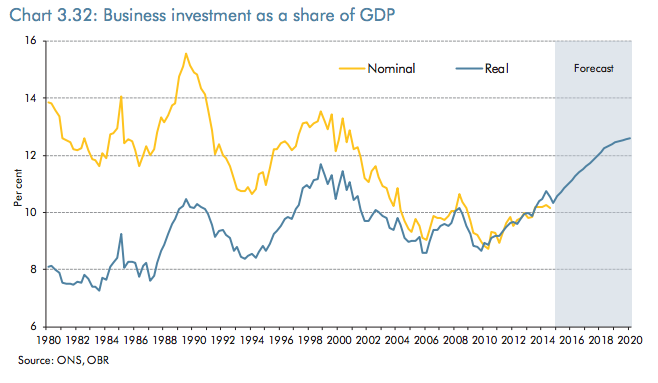 Business is going to have to invest more than at any time since 1980, by some way, for Osborne to succeed in his aim of running a budget surplus, and if trade does not deliver (as I think likely) then the scale of business investment required will move into levels only the Chinese are used to.

Being realistic, this accounting makes clear that there is no way Osborne will achieve a surplus by 2020. It just is not credible to think it possible, and no cuts he makes will change that: the government is simply not able to make such choices on its own. But apparently most people, and almost no politicians, know this accounting fact.

Accountants can be boring. And running the economy on the basis of accounting data is absurd. But to ignore accountancy when it has key messages to deliver is equally daft. It is time that many politicians realised this, and acted accordingly. But I will not hold my breath whilst waiting for it to happen.