I've discussed before whether or not HMRC were right to let HSBC customers whose identities were only known to them as a result of their inclusion on the 'Lagarde list' supplied to HMRC by France in 2010 use  the Lichtenstein Disclosure Facility.  The issue has, however, been bugging me and so I have come back to it again.

The Lichtenstein Disclosure Facility (LDF) has, admittedly, been revised since it was first issued, but since the latest version reflects what HMRC suggest is the correct interpretation of its use it is to that version that I am referring, because if any previous version was inappropriately applied the subsequent revision would, in any event, represent an admission of previous error on HMRC's part.

The latest version of the rules have been interpreted by HMRC to say that it cannot apply to a case of which they were previously aware: 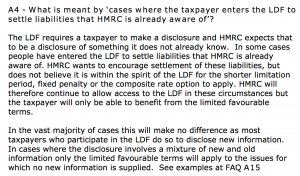 It is also the case that they say it cannot apply where criminal conduct is involved or where prosecution is likely, but the conditions are clearly not meant to be alternatives: both preclude the use of the LDF and so it is the above note that is most important in the HSBC disclosure situation.

And let's be clear: the LDF was defined as a disclosure facility. By definition then it only applied to situations where people voluntarily came froward to declare their liabilities. It could not, and should never, in that case have ever applied to cases where the taxpayer did not make the disclosure and instead HMRC had to find that tax was due by them, as is true in the vast majority of the Lagarde HSBC list cases.

In other words, by its own admission HMRC should never, as Lin Homer said it did, direct HSBC list taxpayers to the LDF so that they might make use of it to mitigate any part of their liabilities arising out of the HSBC disclosures, whether to tax, interest or penalties. That was an option not available to them or HMRC. And if that did happen then HMRC acted ultra vires i.e. beyond its legal powers.

I do not think that means that those who have settled in this way can now claim that they should not be required to pay as a result, although I can just about imagine some lawyer trying that on.

But it does mean that those in HMRC who permitted this are accountable for their own failures to exercise the powers entrusted to them. I think that would only apply to Commissioners of HMRC who were aware of this, but all of those Commissioners who were aware in that way appear to me to now need to be subject to serious disciplinary action and the possibility of dismissal has to be on the cards.

HMRC cannot be seen to be abusing its powers to help tax evaders but that is exactly what looks to have happened here. And that necessitates an urgent review, now.