A Greek default will cost a lot less than bank penalties and fines. So what’s the fuss about?

This is the size of Greek debt: 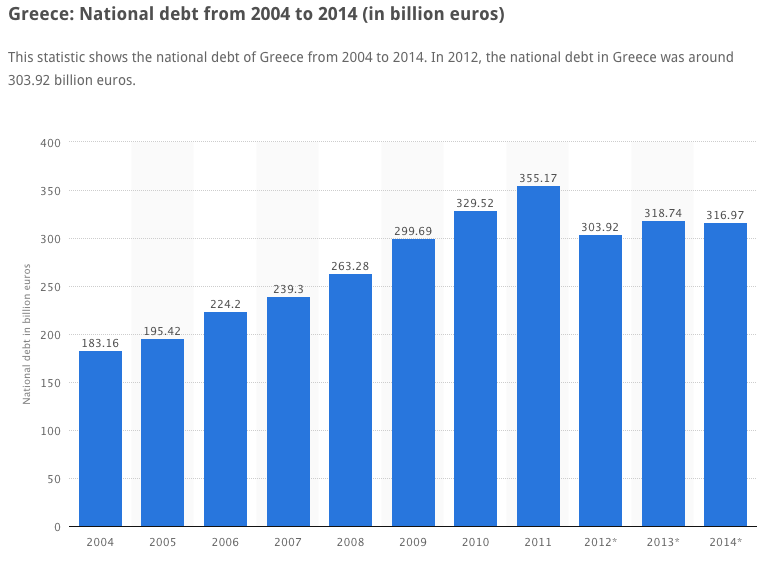 Today I have had comments on the blog like this:

If and when they default, massive losses will be felt all over Europe, whose taxpayers will be forced to take much of the pain.

We need to contextualise that pain. This comes from the Telegraph in November 2014:

[P]enalties for foreign exchange manipulation, Libor-rigging and mis-selling could take the total fines levied on the banking industry above $300bn (Â£190bn), analysts have predicted.

Now, no one is saying that Greece will default on all debt. I can hardly see it happening, and no one expects that. So, even allowing for the fact that the Euro is not the dollar (â‚¬1 = Â¢1.13 right now) the total amount by which Greece could possibly default is much loss than the cost to banks of their crimes and mis-selling.

And none are saying the massive cost banks have imposed is a crisis for pensions or anyone else.

And no commentator who is castigating Greece is saying bankers must bear the burden of their errors.

But they are queuing up to say the Greeks must bear the burden of what 99% of them did not known about and could not have been responsible for.

Could it be that bankers are favoured in this equation and Greece is not?