Predictably the figure is ludicrously low. They say it is £34 billion, made up as follows: 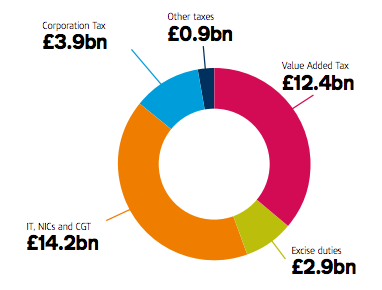 To give some idea of the differences in estimates this is the causation according to HMRC: 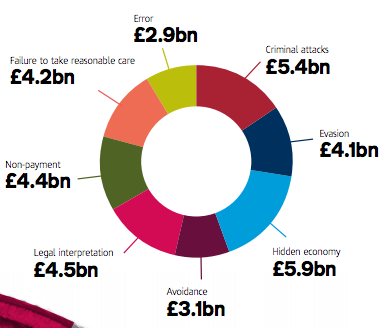 Mine is £45.6 billion for unrecorded trading alone, and from evasion as a whole is about £80 billion.

Now it is likely that neither of us is right, of course: these figures are estimates. But the gap in this one estimate alone is enough to explain much of our difference of opinion so it is important to explain how it arises. That's simple. HMRC only look for errors within the tax returns that they get to come up with their estimates. That ignores the fact that tax evaders choose not to submit tax returns. This glaringly obvious point appears to be wholly unknown to the HMRC publicity machine, although I know its staff are acutely aware of it.

Now this would not be problem if there were just a few tax returns not submitted each year, but looking at companies alone my work has shown that HMRC chose not to ask for corporation tax returns in 2011/12 (for which I have most recent reliable data) from up to 800,000 companies and failed to collect tax returns from another 270,000 from which they did request returns whilst of those submitting returns about half a million said they had no income even though data on PAYE and VAT registrations suggests that is a serious understatement and as a result the fact that only 900,000 or so of the 2.6 million companies in operation during that year actually paid tax is as much due to HMRC negligence in requesting tax return data, and failing to pursue those who do not, as it is to anything else. But of course none of these deficiencies come up in the HMRC stats that assume that all these missing companies are honest non-taxpayers who are fully compliant with their obligations despite the fact that hundreds of thousands of those companies ignore them.

In the meantime, this data is best considered a work of fiction.