The face of tax evasion? It’s time to prosecute

I was amused by the presentation of this Guardian article this morning: 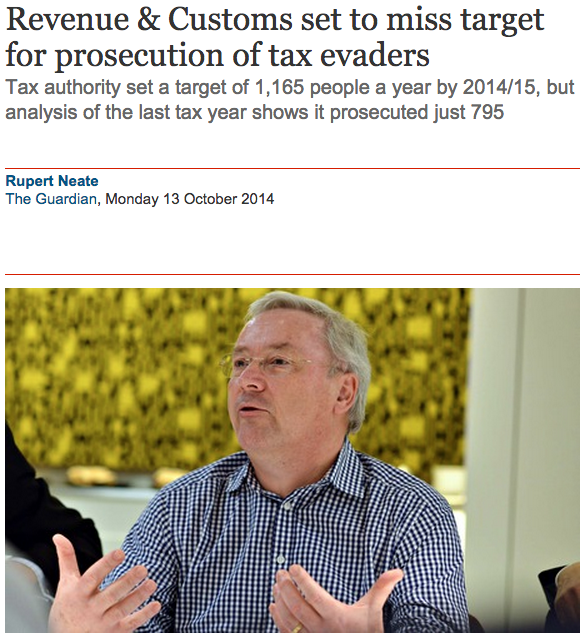 I did wonder if there was an implication that I was now the face of tax evasion and that I am, perhaps, on one of those HMRC 'most wanted' lists, but actually the reference was, of course, to my work on the tax gap, and my latest report for PCS.

The more important dimension of the story is yet another HMRC failure. Despite a supposedly increased budget for beating tax abuse there has been a failure to deliver. I am not surprised  by that: the integrity of the work of HMRC  is dependent upon funding for the whole organisation, not just a part of it. The logic of providing increased funds for one small aspect of its work is, therefore, bound to be mistaken.  This is an organisation that has to work from top to bottom and it is failing, especially at the top, because of a culture failure, and at the bottom, because of a lack of funds.

But there is another aspect  to this not mentioned in the Guardian article, which is that so many of the prosecutions that are reported by HMRC  appear to be targeted at small traders.  Now I am not, for one minute, arguing that there is not a problem with small traders evading tax: there undoubtedly is.  Nor  am I arguing that they should not be prosecuted: there is a good case for them being so.  What is notable, however, is the absence of substantial prosecutions, many relating to offshore,  where we are well aware that there are more significant funds involved in many of the cases addressed but which do not, however,  seem to end in court action.  There is a very good question  to be answered as to why that is the case.