In the late 1990s my friend and tax justice colleague John Christensen left Jersey, fed up with saying, in his role as senior economics adviser to the island's government, that turning itself into a fully fledged tax haven would be a disaster.

Since 2005 I have been forecasting that Jersey had no long term future in this role.

Today Jersey has published new data on its economy in 2013. It includes this table on the changes in gross value added (GVA) for the island, which is its equivalent of GDP, during the course of this century: 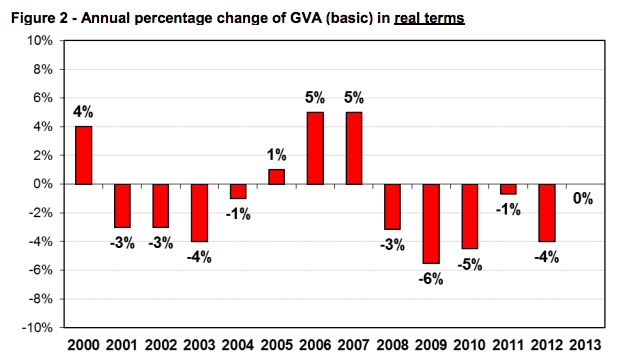 In 14 years Jersey has grown in just four.

Now I know you can't quite add percentages up and be statistically valid but you can certainly say that this data shows a very marked trend.

This year Jersey is celebrating maybe standing still - the first time it may not have lost since 2007.

I think both John and I were right.

I can't see Jersey agreeing, even when the evidence is right there in front of them that being a tax haven just does not pay.