Today's message from the Conservative party conference is a relatively simple one. For those on lowest income there is very little good news because austerity is going to hit this group very hard indeed whilst for the best off the news is really quite good indeed.

The Huffington Post highlighted the IFS Green Budget which showed the impact of an increase in the the personal allowance to £12,500, which was one of the big announcements today, their diagram being as follows: 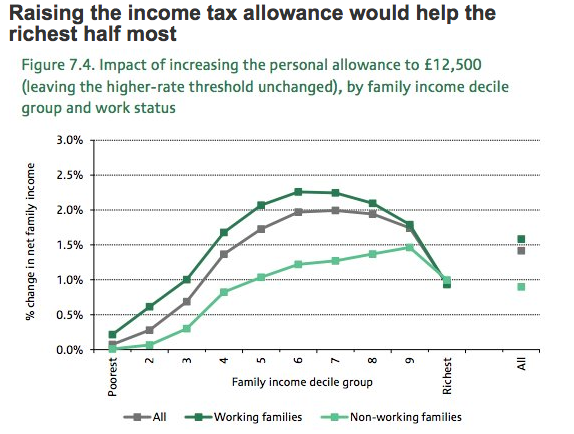 As the IFS said of this proposal:

It's hard to be clearer than that.

And as for the proposal to increase the point where the top rate of tax kicks in? That's a tax cut for the top 15% or so of tax payers. How much? Hard to tell because of timing, but call that 4 million or so people saving tax at 20% on about £8,500 a year at present and that's coming on for £7 billion a year.

So that's £15 billion a  year given away to the top half of the income distribution to be paid for by punishing those in the bottom half.

It's hard to exaggerate how callous this is.