HMRC’s claim to be collecting £23.9 billion a year from compliance is about as bogus as a fraudster’s tax return

I commented a couple of days ago about the story circulated to the press by HMRC in which it claimed that it had collected £23.9 billion of extra tax revenue as a result of its compliance activities. I said then that I was quite sure that this figure was wrong and did not reflect a 'yield' from compliance work but actually from the supposed impact of new tax legislation, adding:

So what we actually have, it seems, are relatively small tax recoveries and massive claims for the impact of new tax legislation in deterring tax avoidance and evasion.

I have now investigated this further, having noted that Baker Tilly, chartered accountants, had also noted problems with this claim. So, I looked in more detail at the HMNRC background briefing on this claimed £23.9 billion recovery. Nowhere do they break the figures down. In fact, £23.9 billion is only mentioned four times and is never broken down. But then I noted this: 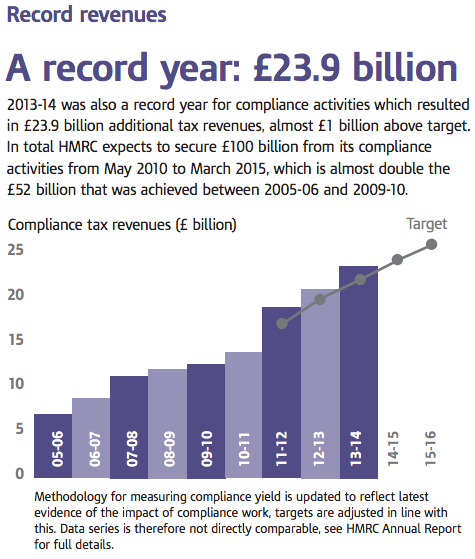 It was the small print at the bottom that especially caught my eye, so I went off to the 2012-13 HMRC annual report, which is the latest available. On the cover of that repot they claim a 'compliance yield' of £20.7 billion - which is the equivalent of the £23.9 billion claim for 2013-14. So I searched compliance yield in the report and found no explanation using that term - which is odd for something you put on the front cover, and so searched 20.7 instead and found this table:

I then searched 'revenue protected' to find what that means: there is no hint of another reference in the report. Searching 'protected' provided no better explanation. What we do know is that it was definitely not cash.

So, to go back to the press release that HMRC issued to the Financial Times on Monday, I think it means HMRC:

Now first of all that's a bogus claim by HMRC: Parliament closed those loopholes.

Second, to claim that's money saved is in the same category as claiming you saved £10,000 by buying a new Ford instead of a Jaguar. It's nonsense.

Third, nowhere is this sum explained. In other words, right now it's fair to conclude HMRC just made it up. And that puts this claimed tax recovery in the same category as a fraudster's tax return. To be polite: it's full of bogus numbers.

Fourth, whatever this is, it's not compliance activity.

As I said before, I wish we had an honest tax authority. It would help. They actually recovered less than £10 billion of tax in all likelihood in 2013-14, which is good news, but peanuts compared to the tax gap. And no doubt that's why they are making wild claims.