Section 2 of the Fraud Act lets offshore tax abuse be prosecuted now: so what else is Osborne going to do?

The government is claiming it cannot prosecute offshore tax evaders at present without proving intent on their part to evade tax if they omit information on their offshore bank accounts from their tax returns.

I have already said I do not agree. Nor do HMRC. This is the declaration on the 2013 tax return: 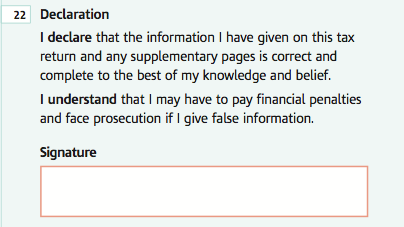 Now, let's think about this for a moment, shall we?

If the tax payer knows they have an offshore bank account on which income has been earned and they fail to declare it then very clearly they have evidenced intent to evade tax. What further evidence is needed of intent?

And if they don't declare it HMRC already say they can be prosecuted.

But HMRC say it's hard to prove intent and new law is needed. Self evidently both claims are wrong or the statement they printed on the 9 million or so tax returns they issued in 2013 is wrong.

And what is the crime they can be prosecuted for now? It's simple: it's fraud. At one time it was called cheating the Revenue. The offence is described in section 2 of the Fraud Act 2006:

Everything needed to prosecute someone submitting  a false tax return is there. The signature on a false tax return is the fraudulent declaration. The gain is the tax evaded. And I do it think subsection 2 is an obstacle: the requirement that the taxpayer appraise themselves of what must be declared is already imposed by law. Ignorance is not an excuse.

I make clear, of course I want prosecutions. I have been calling for them for a long time. But I cannot help but think that today's claims by Osborne, lamely defended by Gauke, look even more like posturing to me tonight then they did this morning.

My prediction is unambiguous: this new law, if passed, will change nothing.