Where is growth going to come from? The government’s amazing assumptions

The following table is from page 106 of the budget report: 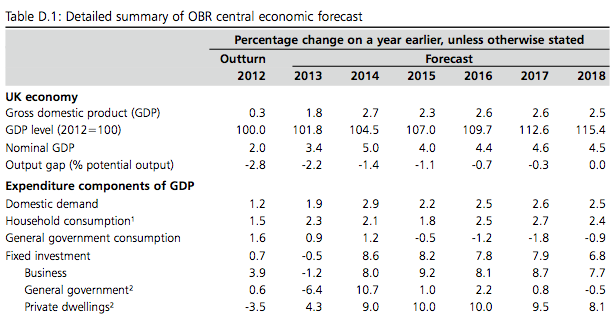 The data at the top of the table shows expected growth rates. The expenditure components shows what might drive this growth.

You will note that it is not dramatic increases in household consumption that will be having a big impact on growth figures:  broadly speaking household spending will go up at roughly the rate of GDP  growth and much of that is explained by an increasing population. Overall,  most households will be no better off in 2019 and they are now  and if there are tax increases, as I forecast, they may well have less disposable income.

The big driver of growth is then, in fact, forecast to be a massive increase in business investment,  which will be more than enough to offset falling government spending and cuts in government investment.

On top of that, building new houses will be what drives the UK economy from now until 2019.

So the simple question is whether this is plausible?  My candid answer is that at present I can see no reason why it is.

We know that big business has been sitting on the enormous cash pile: the precise amount is open to dispute, but what is beyond question is that they have hundreds of billions of pounds on their balance sheets that they have not been spending.  It has always been George Osborne's theory that if only he could cut the size of government spending  then big business would suddenly rush in to fill the vacuum that he had left in the economy by investing for a private sector boom. So far, despite all his austerity efforts, this has not happened.

That should surprise no one: what George Osborne created was a cut in consumer spending as a result of falling real incomes. There is absolutely no incentive for any business to invest in that situation, and as the above data shows,  and as I have argued on another blog,  the reality is that this budget forecasts no real growth in wages over the next five years but that there will be real increases in income tax, meaning that the available spending of most households will continue to fall.  That is why household consumption is expected, even in these forecasts, to rise more slowly than GDP.

Now, if I can work this out, so can big business.  And if there is no prospect of extra spending, the chance that they will invest heavily is remote.  The forecast growth in investment by business looks to me to be  an exercise in plucking numbers out of the sky.  This has been the pattern of previous  Office for Budget Responsibility forecasts,  and I think it is being repeated here.

And then there is housebuilding. We do, of course, now have a housing bubble in the south-east of England, which has been generated entirely at cost to the public purse.  But what we do not have is a significant housebuilding boom and there is no indication that we are going to get one.  Building 15,000 houses on a floodplain in Kent will not change this. Again,  without dramatic government intervention to require more housebuilding I cannot see how this growth is going to happen.  All I can see is a continued house price bubble around London.

I can see no chance of this growth happening right now. For that you'd need a proper interventionist budget, and that's the last thing that this government is offering.