I can remember  when my post-budget reading used to be all about changes in specific tax laws. I still do that,  but I admit that I am more interested in the impact  of taxes on the economy as a whole these days. That's an issue many overlook. As a result  I have been looking at  Part D  of the budget report this morning,  which is the bit that looks at economic forecasts and what it says is significant  in my opinion.

First, this is the overall outlook: 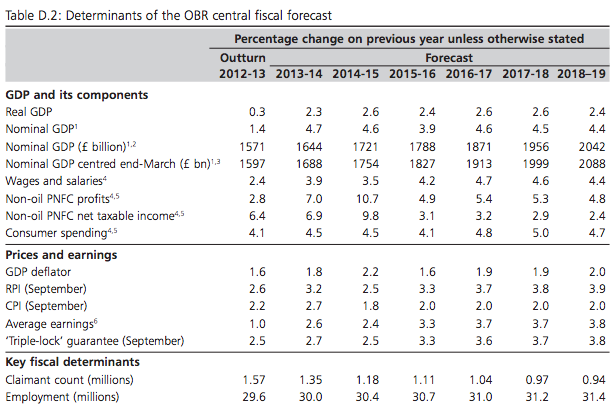 First,  the real GDP line suggests that there will be growth in the economy. This, is, of course conjecture.  Given that almost all the growth of we are seeing at present is the result of a housing bubble, how long can this be expected to last?

Second,  by comparing  wage and salary growth with the retail price index (RPI),  which for ordinary people is by far the most important measure of inflation,  it  is apparent that the government thinks that  wage  growth will very slightly outstrip inflation during the course of this period. I  stress the 'very slightly'  because once  the figure for wages and salaries is adjusted for the number of people in employment what average earnings show is that wages will not quite cheap pace  with this inflation marker.  The truth is  that this forecast says that for most people in the UK  the next five years are going to be a matter of standing still,  at best.

Third,  this, however, will not be true for those living off investment income:  profits are forecast to rise  at a rate above inflation.

Consumer  spending is also forecast to grow at a rate somewhat higher than average earnings. Now we know where  growth will come from:  the government is expecting us to get increasingly into debt.

All, in all  this is not a pretty picture:  for ordinary people real earnings growth is not going happen within the foreseeable future and the only way they will make ends meet is by borrowing.

This picture is, however, one that is  painted before tax is taken into account.  This is the tax data:

To interpret this data I have done some early morning spreadsheeting: 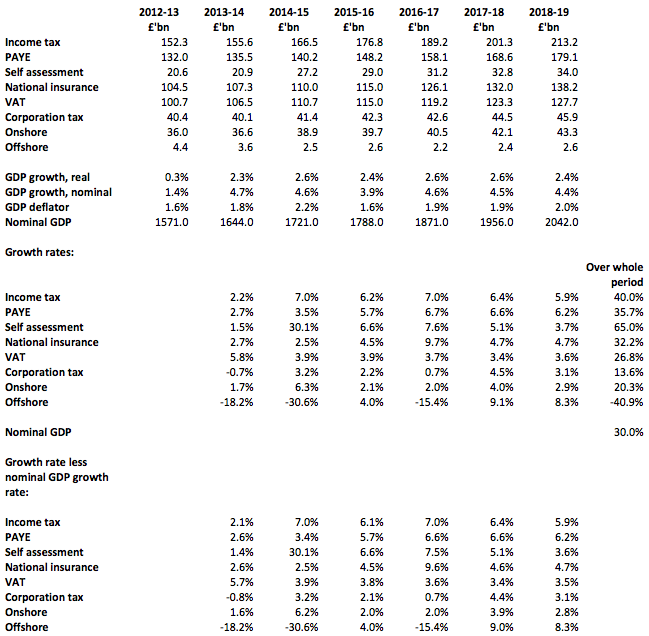 What I am seeking to find is what the forecasts are really saying as to future trends in UK tax. So, I have looked at growth rates in tax revenues by type and by year and I have then compared these forecast growth rates to the nominal growth in GDP to see whether they are above expectation or not. There are a few niggles in doing this, I admit, but not enough to change the overall conclusions that can be drawn, which are important.

But income tax revenue is forecast to rise by 40%. There are  going to be real income tax rises after the next election.

The  forecast rate of growth for self-assessment income, much of which comes from self-employed people,  is astonishingly high:  it is more than double the rate of increase in nominal GDP.  Either the government is expecting a boom in investment income or,  more likely,  many more self-employed people.   How, however, when productivity is low, and self-employed earnings are falling, they expect the tax yield to grow so heavily  I am not sure.  This looks wildly optimistic to me.

In contrast  to the forecast increase in income tax revenues, national insurance is only forecast to rise at a rate just above nominal GDP. This may be because of the growing numbers of self-employed people: they, overall, pay less national insurance  as a proportion of  their income but have fewer rights to claim benefits as a consequence.

More surprising still is the forecast decline in VAT revenue  where there is suggestion that  income will fall at a lower overall rate the nominal GDP.  Is a VAT cut on the cards after the next election?

However, by far the most significant change is with regard to corporation tax. Although the government clearly expects a booming profits from the self-employed they are expecting larger  businesses,  which are almost invariably run through companies,  to enjoy real cuts in their tax paid over the next five years despite the fact that they are  forecast to enjoy a significantly bigger part of total national income than at present.  this is true even when the decline in North Sea oil revenues (the offshore element of corporation tax receipts) is taken into account.

So, what's the overall story? I suggest it is this.

First, for most people will be no income growth over the next five years.

Third, many more people will be self-employed.

Fourth, a VAT cut looks like a possibility at some time over the next few years.

If you want to cut your taxes, incorporate. The government is guaranteeing that big business is going to have a good time over the life of the next Parliament.

Sixth,  expect to borrow more: there is no other way that the growth that the government is forecasting will happen.

In summary:  it's not a pretty economic outlook.