Why have benefits increased?

To follow on from my last post on who benefits from benefits, I am grateful to Flip Chart Fairy Tales for drawing my attention to this official briefing on the cost of social security. It included this chart: 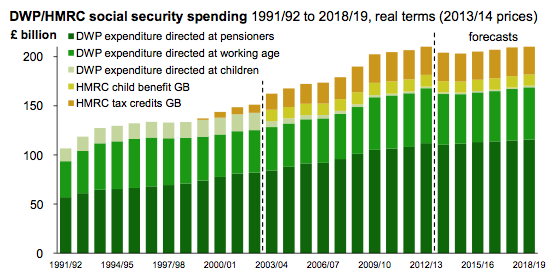 The cost of social security has in real terms approximately doubled since 1991/92. That sounds really shocking until you look at this table: 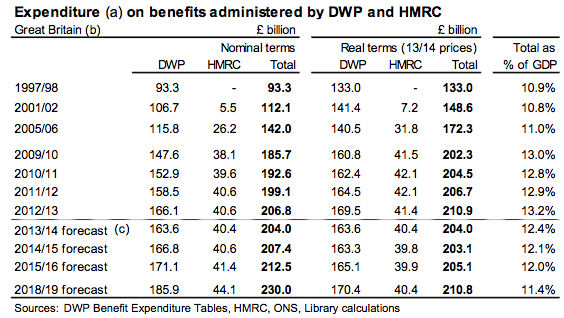 This data does not go back until 1991/92, admittedly. I am not sure why; it is a shame it does not. But what it does show is that in real terms the increases are not as big as crude numbers imply. As a nation we are richer. We spent more, but that was the benefit of being better off.

And why did we spend more? The graph makes it clear. We have doubled the amount paid to pensioners. The benefits aimed at working age people and children have remained remarkably constant. But more was spent on tax credits. There were good reasons for that. There was an aim to get people into work. And work was not paying. So these payments subsidised big employers as much as they did any claimant.

In a nutshell the cost of social security went up because we have more old people and we have employers who will not pay a living wage.

Now we're trying to cut the cost of pensions.

And payments to support children.

And support for people at work paid so that they can work.

Does anyone really think we'll be richer as a result?

And if not what is the motive for this?

It is hard to find any other sentiment driving the change.