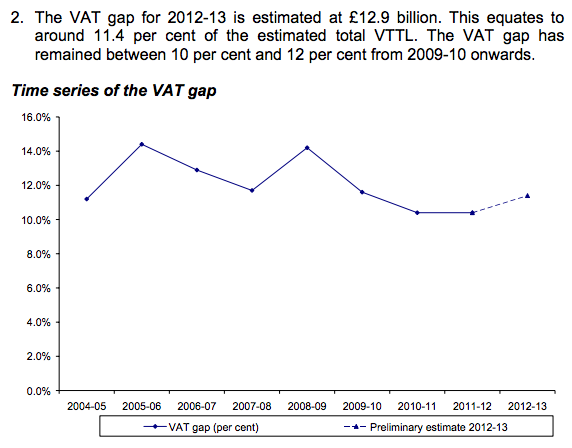 To put the data in context the time series looks like this (from the 2013 Measuring Tax Gaps publication  by HMRC):

HMRC say of this data:

That may be true. There's suggestion today from a source outside HMRC (but I somehow think well placed for the job) that the current rise is not due to the recession or HMRC efficiency but due to increased fraud in supposed precious metal trading. I candidly have no clue whether that is true or not; I am inclined to think it's a good excuse right now.

The importance is the trend and the average of this data, as well as what it implies.

The trend is now upward; which is almost inevitable in a prolonged recession when incomes are squeezed. The temptation to fraud increases.

The average is now 12.1%. It so happens that this is a figure really rather similar to the 12.5% tax gap loss that I used as an estimate for the UK based on the size of its shadow economy when estimating the EU tax gap. However, despite the fact that the VAT gap is tax lost from the top line of the UK economy - that is from unrecorded sales - the UK government insists that the UK tax shadow economy is just 1.7% of GDP.

That is ludicrous: indeed, it's just not possible. HMRC are even worse - they say evasion is just 1.3%.

Now I'm not saying all VAT abuse is evasion - although much is. But what I am quite sure about is that this data implies GDP may be understated by as much as 10% (although it may be a bit less) and the tax gap on that alone - all of which is evasion - could exceed conservatively £50 billion based on current GDP and total tax yields. Add to this the HMRC estimate of tax loss from all but avoidance in their own timid tax gap figures and yet again the gap from evasion must exceed £70 billion (and I do not think I am double counting VAT - I have downgraded the £50 billion to allow for this).

This is data I will return to. But the fact is that however it is stated the tax gap remains vastly higher than HMRC say it is, a fact Margaret Hodge pointed out not long ago when she described their estimate as 'the tip of the iceberg'.