I was quoted in a Daily Mail story over the weekend on Thames Water. As the Mail noted:

Thames Water sparked fury yesterday when it announced it will not pay corporation tax for up to a decade.

Britain’s biggest water supplier has already been berated for racking up more than £1billion in unpaid taxes.

But as it reported soaring profits after the summer heatwave, finance director Stuart Siddall said: ‘It will be seven to ten years until we pay tax.’

Labour’s Margaret Hodge, chairman of the Commons Public Accounts Committee, called it ‘deeply unfair’, saying Thames Water — which is owned by an Australian consortium — had an ‘obligation to pay their fair share in tax’.

Tax accountant Richard Murphy, who helped expose tax avoidance by Starbucks, said: ‘The reality is that much of this will never be paid.

‘They are never going to stop spending money on infrastructure, which means they will probably never pay tax. Companies like this have to say when and if they will ever pay tax.’

Let me explain the concern. First, let's make clear that Thames Water is not doing anything illegal - but tax avoidance is not illegal, so that does not mean that tax avoidance is not taking place.
Second, let's also make clear that there have been suggestions made that Thames is engaged in tax avoidance, some of it offshore through the Cayman Islands, and even though it is claimed by the company that this does not impact the UK tax bill  there are reasons for this choice of arrangement.
But then let me make the point I referred to when being interviewed for this piece. The real problem with companies like Thames Water is that we have no idea when they will pay tax. The company itself says in its interim statement: 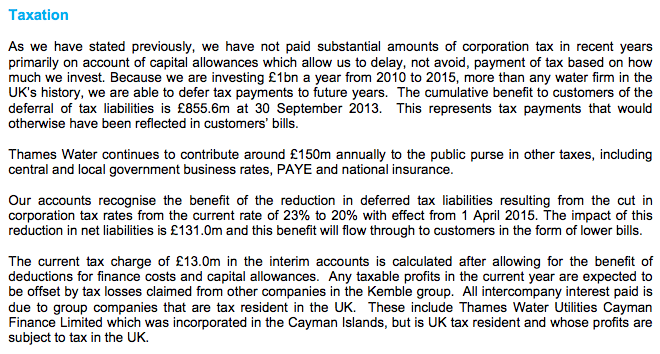 The annual accounts are, if anything, even less helpful on the use of the deferred tax liabilities: no clue as to timing is given there, and this was my point. In my opinion a company should be obliged to state when any deferred tax will become due and payable, if at all. Of course such forecasts are bound to be illustrative only, but if company valuation is - as most analysts like to claim - based on the discounted value of future cash flows due by the company then such disclosure is vital to all users of the accounts. Right now it is simply not available.
There is another dimension to this; even in a regulated business as Thames Water is to claim that payment of tax benefits the customers of a company is disingenuous. I am aware that water charging is not standard but this pushes the boundaries of credibility beyond any  known limit. Thames would be wise to stop making such absurd claims.
A little more clarity and a little more honesty in terms of tax incidence in their tax accounting would go a long way.
Donate
38