I was quite heavily featured on Channel 4's Dispatches programme on the Big 6 energy companies last night. You can watch again here.

Preparing a programme like this takes a lot of work. A tiny fraction of what is discovered gets to air. In this case from my perspective several things were missing from the programme, although I am not blaming the programme makers for that; in 30 minutes they tried to get a balance in place.

The first thing that the research very quickly revealed about the Big 6 energy companies is how little they say about themselves. It's true that SSE is 97.5% a UK company (it's Irish operation, an Isle of Man insurance company and a couple of BVI subsidiaries that it says it has now liquidated apart). In that case we can get a fair idea of what it does in this country. But for the rest? That's very difficult, verging on nigh on impossible.

Take Npower as an example. As I highlighted earlier this year, it's entirely reasonable to argue that Npower avoided significant amounts of UK tax from 2009 to 2011 by routing interest payments that financed its UK business through Malta. Npower denies this but their defence is itself telling. First, the report they issued to defend their tax position is published in the name of one company but has the company number of another Npower company on it: we can't even be sure who is making the claims. Second, the accounts they refer to when making claims about the UK are not UK accounts at all, but those of the parent company, RWE, in Germany. Third, try as I might, I cannot reconcile all the data in the tax defence document to the German accounts.

And this is important: what it says is we simply do not know what is happening in these companies. That is because, as I argued earlier this year, what is really needed is that Npower and all these companies clear up the confusion about their profits and activity in the UK by publishing a single set of accounts for the UK as a whole showing just what trade they undertake here, how much profit they makes in this country and how much tax they pay as a result. The days when companies can issue multiple profit figures for one country should be consigned to history.

That's important because it's a simple fact that these companies do publish multiple profit (or loss) figures. Since they do not publish figures for the UK as a whole they publish lots of separate accounts instead. Take EON as an example. These are the UK licence holding companies they own according to their Ofgem report: 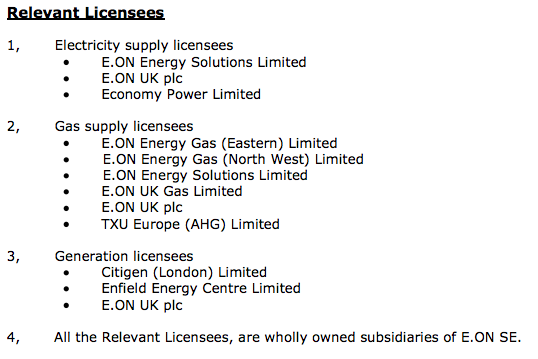 Each has a profit or loss. That profit and loss can be reported as profit before tax, profit before interest and tax and profit before interest, tax, depreciation and amortisation. It does them all. Ofgem encourages the second. The companies prefer the third and I like the first because I am interested in tax and the real bottom line (and why not?). And I cannot get one overall picture. That's why, for example, in the case of Npower I have said that the company paid no corporation tax for three years from 2009 to 2011 and yet they now said they did, albeit just £2m to £3m (note the imprecision) but have admitted that this required them to search approximately 15 companies to prove the point. I think that approximation is telling: even they are not sure how many company accounts you have to hunt through to find the data.

What is more, if you did hunt through you would still not find answers to vital questions, like how much is made from generation, how much from wholesale trading and how much from retail supply. Ofgem data covers the first and last: reconciling the data they have with accounts is often hard and the data limited. Why, for example, do they ignore some costs?

And this brings me to my second point: we have a regulator for energy who does even have the gumption to demand that these companies produce data fit for regulatory purposes that they put on public record. So even a company like Centrica that owns British Gas does not reveal enough UK data in its accounts to show just what it makes in this country, making a mockery of its name. Ofgem is failing as a result: we have a toothless regulator not demanding information that is fit for purpose. They should require, as I note above, a full set of accounts for the UK activities of these companies that also reveal all their intra-group dealings with companies outside the UK so that we can see how they impact on UK declared profits. Then and only then will we know what is really happening - and in this case that will also require separate reporting for generation, wholesale and retail as well.

And my third point is that if this is not possible under existing legislation then we need that legislation to provide those accounts, now. This is, of course a variant on country-by-country reporting, and rightly so. But so what? When we know that accounts prepared under International Financial Reporting Standard  are not designed for the use of regulators - they explicitly say so - then we need to legislate for new accounts that do meet that need. If not we end up with global companies running rings around countries, regulators and the consumer. And that has to stop.