I was intrigued by a recent headline in Isle of Man Today that read:

It may come as a surprise to many who know our streets aren’t paved with gold.

But the Isle of Man has been placed in the top 10 by the World Bank out of 214 international economies in terms of Gross National Income (GNI) per head of population.

We are listed in eighth place ahead of the UK and US and beaten only by top-placed Monaco, Liechtenstein, Bermuda, Norway, Switzerland, Qatar and Luxembourg.

It took me a while to track down the data to back up this claim, but now I've found it, and here it is, issued by the World Bank in late September for gross national income per capita: 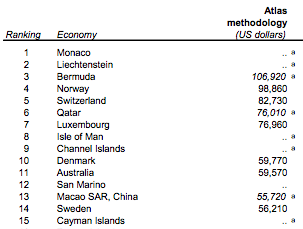 2012 data not available; ranking is approximate

So the Isle of Man is issuing a claim to be the eighth most wealthy nation on earth on the basis of data that does not exist. So secret are they that information is not to hand. We just have to accept there word for it. And that of Monaco, Liechtenstein, Bermuda, Jersey, Guernsey, San Marino and Cayman.

Clearly the secrecy process works: they accumulate vast wealth so unaccountably that they claim credit for it without actually accounting for what it is. You couldn't make that up.

Nor could you make up the claim to nationhood when the Isle of Man does not, of course, enjoy that status.

But the sting is in the tail of the local newspaper story on the issue:

However, the World Bank statistics are not a ranking of personal income, ie the wages in our pockets. And while the economy as a whole is showing strong growth, the domestic economy is struggling.

The strong economic performance has been underpinned by continued growth in a number of business sectors, including e-gaming and engineering.

But while e-gaming showed strong growth of 16.6 per cent in real terms, and engineering up 10.9 per cent, other sectors have fared far less well, with construction down 5 per cent and retailing down nearly 20 per cent.

So in the make believe offshore world the Isle of Man is doing well and the real world  down in Douglas things are not looking so good, which does again, of course, fit perfectly with the notion of the secrecy jurisdiction.

It's time for the Isle of Man to face reality: for all the hype it is a little island captured and abused by the finance industry for its own ends and they do not care in the slightest about the place or the consequences of their use of its ability to legislate in ways that abuse world economic stability that result in hot money flowing through its coffers. That's what this story relates, as it does for so many of the other tax havens on this list.

And that's why their abuse still needs to be opposed.