I thought that this exchange between John Githongo and Alex Cobham on twitter last night was interesting: 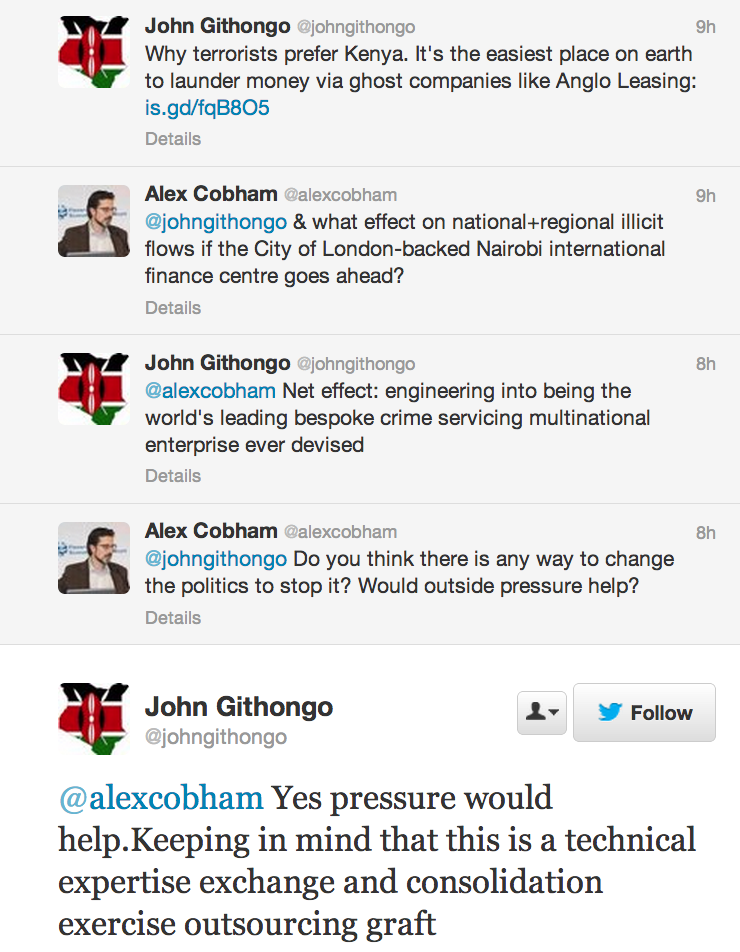 John Gothingo is a former Kenyan journalist who investigated bribery and fraud in his home country and later, under the presidency of Mwai Kibaki, took on an official governmental position to fight corruption. In 2005 he left that position, later accusing top ministers of large-scale fraud. The story of his fight against corruption is told in Michela Wrong's book It's Our Turn to Eat: The Story of a Kenyan Whistle-Blower. Alex is a long term friend and colleague of mine, now with the Center for Global Development.

What John and Alex are referring to is the plan first reported in February this year to turn Nairobi into an international financial services centre - or full blow tax haven if you like - as a branch of the City of London. It was referred to in the Kenya Standard in February:

Nairobi’s vision of following the footsteps of London, and becoming a global financial centre, has started taking shape with a financial firm appointed to deliver the work – TheCityUK – seeking partners to participate in the development of the project.

This month will mark another chapter where top UK City businesses and officials are expected to receive a high-level Kenyan delegation to London to discuss plans to transform Nairobi into a world-class financial centre or destination.

The bodies appointed to deliver the work, under the sponsorship of the Lord Mayor of the City of London and the Ministry of Finance in Kenya, are TheCityUK and the Kenyan Capital Markets Authority (CMA).

TheCityUK – an independent membership body for promoting the UK-based financial and professional services industry – said in a statement that the focus of the Nairobi international financial centre (IFC) work is to be embodied in a Memorandum of Understanding (MoU) with Kenya.

This plan has, so far, become little known. It deserves more attention. What it shows is that the colonial thinking of the City has not stopped. It's territories in the Crown Dependencies and elsewhere are reforming under pressure, so what it is doing is opening up new space in which its activities can be undertaken. And I am sure John Githongo is right: this could engineer the world's most bespoke crime servicing multinational enterprise ever devised.

What does the City think this says about it?