If anything these reports get more ludicrous by the year. The methodology - much of which relies on ignoring the fact that tax evaders do not submit tax returns or file their company accounts with HMRC or Companies House - continues to be absurd. I have taken it apart before, here, and don't propose to do so again now.

Instead let me just highlight some of the absurd anomalies in this year's report that I have noted so far. Let's take corporate tax avoidance for a start. According to HMRC in 2011-12, they year to which this report relates UK tax avoidance in that year was just £4 billion and was split down as follows: 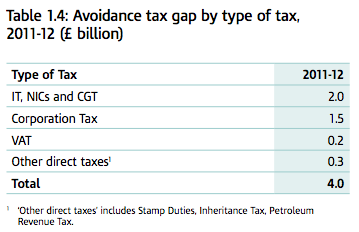 Now this report in the Mail on Sunday in April 2012 - covering the same year as a result - gave an estimate (and in my opinion a fair one) of the tax avoidance of just a few giant tech companies:

That's, as they note, £685 million lost to five companies. Microsoft and Yahoo are not in there. And there are, we know, plenty more playing such tricks. But apparently the total lost is just £1.5 billion.

Actually, that's because none of these losses to tech companies is in HMRC's figures. They may have been in David Cameron's sight lines when attacking tax avoidance but HMRC refuses top recognise they do anything wrong. And that's ludicrous.

And then let's look at NIC. There is no figure given in the report for a separate NIC loss that I can find. When it comes to NIC avoidance they say: 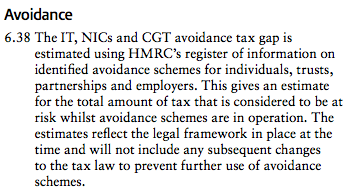 But the payment of dividends to the owners of small companies in lieu of salaries in the contracting trade is by far the biggest loss to NIC avoidance there is: that's all such arrangements are designed to deliver and successful challenges under IR35 still happen, albeit rarely. This is a scheme.

I estimated long ago that the annual loss to such abuse was at least £1.2 billion and the number of companies now suing such schemes has grown considerably since I did so in 2007. The loss must be much higher now. But it is nowhere in the calculations. the word dividends is not mentioned once in the report.

I could offer another example. When it comes to evasion these classic comments on methodology are made:

Let's be candid: this just means they made the numbers up. But there is data on the size of the shadow economy: I used it in my work on the EU tax gap which is now the basis of the official EU estimate on this issue. The UK shadow economy is estimated to be 12.5%. HMRC reckon the cost of the loss to the shadow economy is £3.2 billion - suggesting the economic activity in the shadow economy at an overall tax rate of 38% might be £8.4 billion or 0.5% of the UK economy. If I generously added in their crime figure to that on top of the moonlighters and ghosts the total loss would still be only £7.9 billion - implying shadow activity of £21 billion or 1.3% of the UK economy. To be polite this is pure fantasy.

And finally, for now, let's look at VAT. It's important to remember some history here. The VAT rate was 17.5% for many years to 1 December 2008 when it dropped to 15% and stayed there until 31 December 2009 when it went back to 17.5% only to be raised again in January 2011 when it went to 20%. The implication of a higher rate is obvious: more VAT will be lost. Each pound put in the pocket costs HMRC more. But this is the estimate of the overall VAT gap:

This point is fair, but the implication is bizarre. When the incentive to evade VAT increased considerably because of the increased rate in 2010-11 and 2011-12 the compliance rate went up. Now I am grateful for what might be seen as an official rebuttal of any Laffer type effect but candidly I do not think that is in the remotest but plausible, especially given the massive decline in the number of VAT inspections which I think is far more likely to explain this loss. This data is just not credible.

There is however one overall piece of data on VAT which may approximate to credibility. This is the average VAT loss from 2005 to 2012:

The average loss? That's 12.2%. And  that average loss for VAT remains remarkably close to the size of what I think the UK shadow economy might be at 12.5%. I do not think that a coincidence.

So, let's take HMRC's absurd totals for all losses to be right bar the shadow economy and crime, which total £7.9 billion and we are left as this table shows with an overall loss of about £27 billion form avoidance, mistakes and so on. That's far too low for reasons noted above, but let's not quibble for now. This is HMRC's estimate of errors and avoidance in the system. 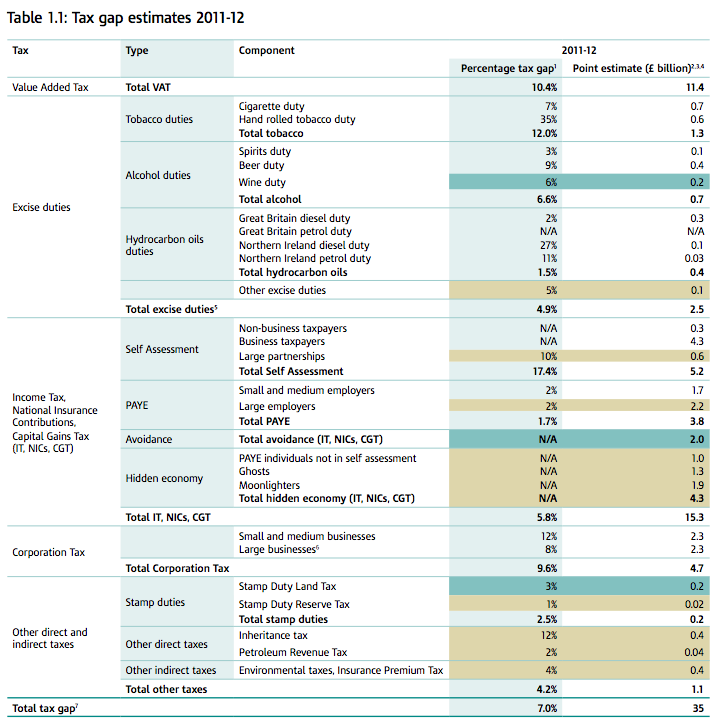 Now let's take GDP as £1,581 billion, as it was when last I looked, and use an overall tax rate of 38% on that, based on budget data, and take an overall shadow economy rate of 12.2% (and yes I know VAT does not apply to everything, but the sample is big enough to justify the extrapolation across all economic activity) and then the loss to evasion comes to £73 billion.

Now what have I always said the losses to be? £25 billion to avoidance and £70 billion to evasion or £95 billion in all ignoring tax paid late.

And what does this combined total come to? Well, £100 billion.

That's a might big difference from HMRC. But it's a lot more credible than their work of fiction and guess work.

I stick by my numbers, and suspect they're now seriously understated.