How big is tax evasion? The Guardian’s visualisations based on my work

The Guardian did a blog on tax evasion yesterday. The data was drawn from my November 2011 work for the Tax Justice Network. As they reported:

The trial of Barcelona footballer Lionel Messi on charges of tax fraud has come at a time when Spanish government coffers are running particularly low. Which makes it all the more contentious that tax evasion cost Spain â‚¬80bn (£67bn) in a single year. But that seems small fry compared to the estimated $337bn the US treasury lost out on.

The numbers, taken from World Bank estimates on the size of each country's shadow economy, are fascinating — even if not perfectly reliable. Counting any type of illicit behaviour is always prone to error and black market activity is no exception.

When different regions are compared, Europe comes out the worst in terms of the size of its black market and the total amount of tax it loses as a result. 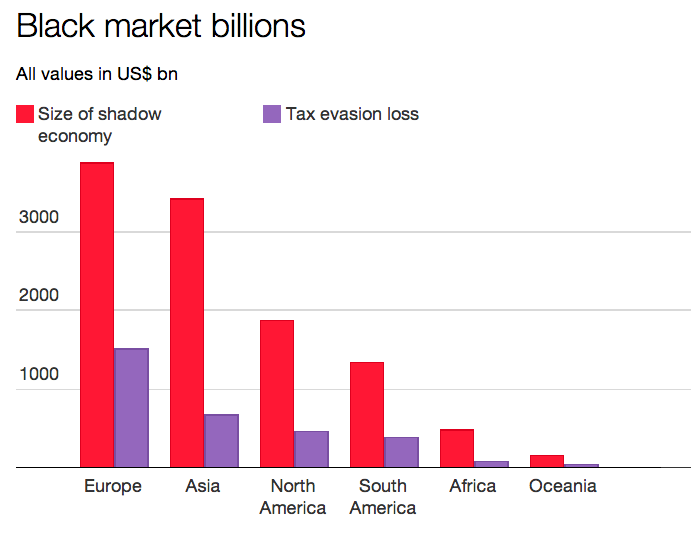 As a region though, Europe also has the highest tax rates in the world. Out of 36 countries looked at, Europeans averaged a tax rate that was 39% of their GDP, compared to a world average of 28%. The lowest rates were found among 39 African countries which had taxes that represented around 17% of their GDP.

In 2010, the latest year that data was available, ten governments in the world lost out on $100bn each (£62bn). Unfortunately, using the total amount of tax lost as the basis for comparison means that interesting case studies like Greece are left out - even if their shadow markets would represent a big chunk of their GDP.

The US has the world's biggest shadow economy and loses the most tax as a result. But, when looked at as a % of GDP, Russia suffers most as a result of tax evasion - the lost money represents 15% of the country's economic output. You can see how each country compares by clicking on the different options in the chart below. 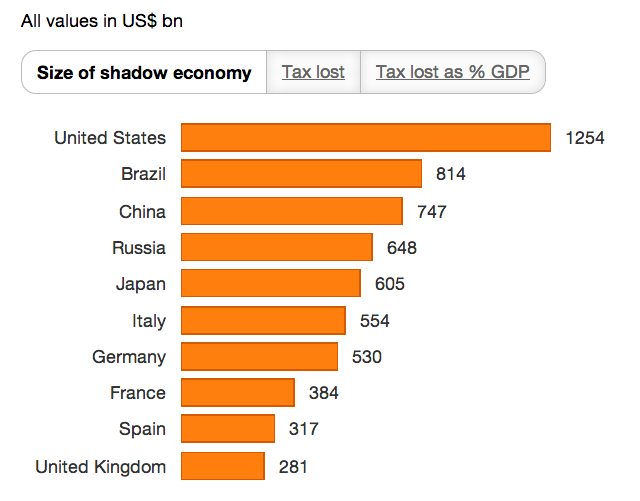 Switching your view to 'tax lost as a % of GDP' means that the allegations against Messi take on a different dimension - Spain rockets up from 9th to 4th place: 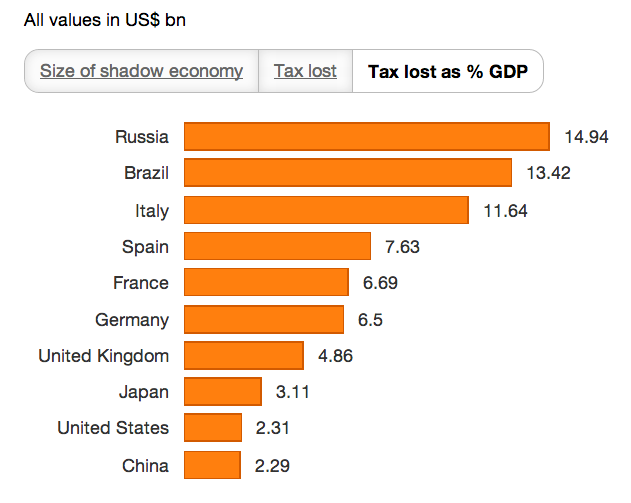 The Tax Justice Network have estimates for every country in the world in a report they published in November 2011. The research specifically focuses on the way that tax evasion affects health care spending. In Bolivia, they found that tax evasion represents 419% of the government's spend on healthcare while in Russia it was 311% making them the top 2 'tax evasion losers'.

What is a shadow economy?

Is a black market really a good reflection of the black hole tax evasion creates? Here's the definition that the World Bank's researchers used so you can decide for yourself:

All market-based legal production of goods and services that are deliberately concealed from public authorities for any of the following reasons:
1. to avoid payment of income. value added or other taxes,
2. to avoid payment of social security contributions,
3. to avoid having to meet certain legal labour market standards, such as minimum wages, minimum working hours, safety standards, etc and
4. to avoid complying with certain administrative procedures, such as completing statistical questionnaires or other administrative forms

It's always, I admit, fund to see your research work getting an outing.