Taxing multinationals: Lords sets out the case for unitary taxation and then dismisses it in favour of Devereux’s unworkable scheme

As Andrew Goodall, a long time supporter of tax justice has noted on his blog:

Taxing multinationals: Lords committee sets out the case for unitary taxation and then dismisses it

The House of Lords economic affairs committee's report "Tackling corporate tax avoidance in a global economy: is a new approach needed?" contains some surprises, including a call for the Treasury to conduct a wide-ranging review of the UK's system and to consider the merits of a "destination-based tax". The report also sets out some very persuasive arguments for unitary taxation, before dismissing the idea.

Andrew thinks they're wrong to do so:

Something has to be done about the ability of multinationals to exploit gaps in the system and accumulate huge sums in tax havens, and peers are right to point out that the present international system "offers great scope for multinational companies to shift their profits between countries to reduce their tax liabilities and creates an uneven playing field".

The committee also recognises that the inadequacies of the tax framework "do not absolve corporate taxpayers and their advisers from responsibility for their actions".

It notes that Professor John Kay, writing in the Financial Times last month, said governments were mainly responsible for ensuring that taxation remains fit for purpose. The correct starting point, he said, was "the flawed structure and implementation of corporation tax".

So you'd think they'd want to do something, but no, they don't despite noting the current "separate entity" approach itself may also defy reality and reporting that:

Professor Sol Picciotto of Lancaster University said: 'What is needed is a new perspective, a new way of looking at multinational companies … When you think of a company like Google, it looks like a unitary entity. But from a legal point of view, they actually consist of hundreds of different individual companies ... Instead of trying to treat them as if they were independent entities in different countries, the perspective should be to accept that they are unitary entities and build on that.'

But the committee then identifies "significant obstacles" standing in the way of any move towards unitary taxation. It concludes that "treating multinational companies (sic) as single entities in a global economy is attractive in theory [but] there would be formidable difficulty in reaching global agreement, or even within the EU, on a common tax base, let alone on the appropriate allocation".

Instead they support Mike Devereux's destination based sales tax, an unsurprising conclusion since he was technical adviser to the committee and no doubt wrote the report for it. Now let's look at the significant obstacles to Mike's proposal, based on a paper he gave in Oxford in June this year: 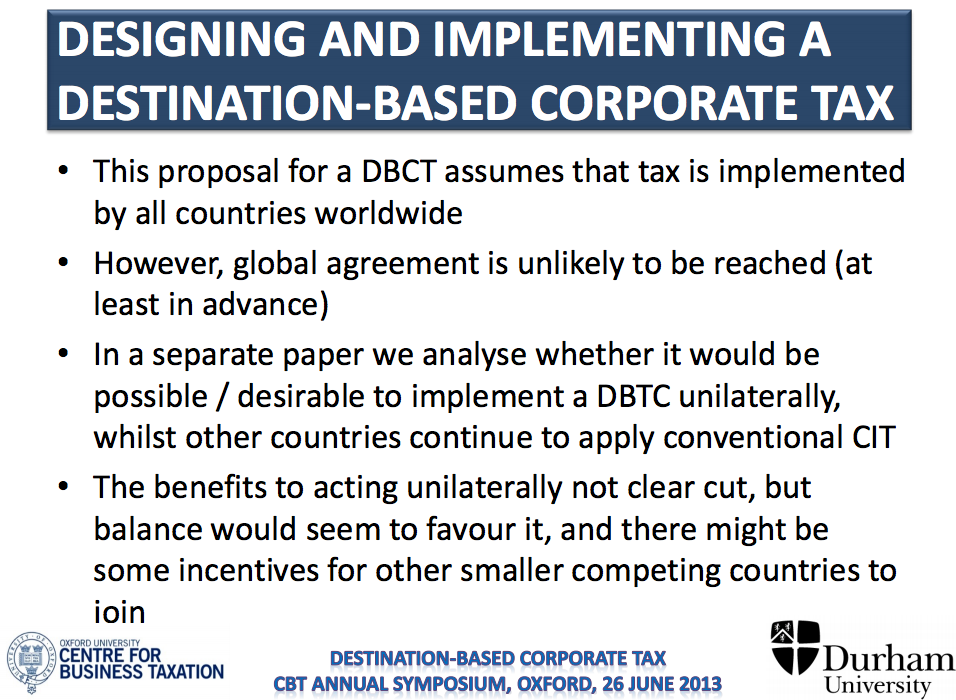 So the only minor obstacle to Devereux's scheme is that it has no proven benefit unless everyone does it at once. And the case for it is made on the basis that an impossible agreement is reached.

And this was proposed instead of the programme of gradual reform within the OECD framework Sol Picciotto, the Tax Justice Network, I and others have proposed. That's straightforward dogmatic folly. As Andrew Goodall argues:

Unitary taxation has its potential problems, but it is at least arguable that the separate-entity approach defies reality. Advocates of unitary taxation argue that it could eliminate profit-shifting. The idea should be given serious consideration.

And Devereux should get back to the blackboard and the world of economic fantasy where, unfortunately, he belongs until he can bring forward ideas of real world usefulness.