I will write about Jersey's new report on its finance industry one more time today. It says the source of its funds and where they are invested is as follows: 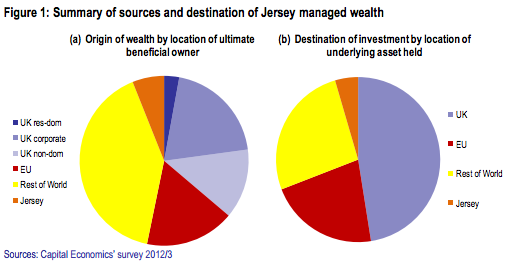 Let's be clear: any total for the UK sourced funds must include the £150 billion of funds from non-doms, who are people who only escape UK tax because of our racist tax law that allows some people to escape tax in the UK by accident of their birth and who only place funds in Jersey to blatantly get round settling the taxes due in the UK. So much for Jersey's claim that it does not help tax avoidance!

Then note that when all UK source funds are added together - and the precise stats are not published with this chart and so far Jersey are not sending me the full report - we come to at least 40% of all Jersey funds having UK tax resident origin. What's also obvious is that less than 50% of  funds managed in Jersey are invested in the UK.

In other words, what is very obvious is that the vast majority of funds invested in the UK from Jersey did in fact come from the UK in the first place and only went to Jersey to avoid or evade tax (I stress, both). There can be no other explanation. Nothing else would justify the costs incurred in using Jersey.

Then let's note that the net funds actually invested in the UK from sources other than the UK  are in net terms small in comparison -  somewhat less than 10% of the overall funds Jersey claims to hold. And in that case let's draw the obvious conclusion: what this  data shows is that we're looking at nothing more than a classic round tripping operation where funds leave the UK for Jersey only to return almost immediately to the UK with Jersey's role being to strip tax out of the return on these funds that are really earned in the UK.

How much tax? Well, let's accept Jersey's claim that the total funds they have under management amount to £1.2 trillion in all and that 40% or so come from UK tax residents  as noted above. That gives £480 billion of funds stripped from the UK for tax abuse purposes. And let's assume a rate of return of just 3% on those funds and that an ultimate UK higher rate tax paying beneficial owner of these funds will pay 40% on that return in the UK at present (Jersey denies companies pay tax so I'll deal only with beneficial owners here). That's a loss of £576 million a year to the UK in tax paid.

Now note I'm being very generous with my assumed rate of return here and also note two further things. The first is I assume there has been no tax evasion on the capital invested, which is very generous and highly unlikely to be true. Secondly, I am aware that there is an argument that the tax lost may be paid one day, but that is irrelevant. First it is not paid now, and the UK tax gap is having real social implications at this point in time and not at some time in the future so that tax lost now has consequences now which cannot be relieved by saying the tax is deferred and second we have no idea how long that deferral will be for so the appropriate discount rate for any tax to be paid would be very high - meaning for all practical purposes even economically speaking the tax revenue is lost. However, for the sake of argument let me round down the tax lost to £500 million, which is likely to be far too low.

Then let's put this in context. The bedroom tax is designed to save the UK £465 million a year.

So Jersey costs the UK more than the bedroom tax saves.

This is what Jersey costs the UK each year.

It does not create the 112,000 it claims that its investment creates in the UK: the vast majority of the money that supports those jobs was already in the UK in the first place so this claim by Jersey is totally spurious. But the tax lost is not a work of fiction: the precise amount can be argued about but in the current year (which is what matters) I suggest I am likely to have ultimately underestimated it.

And in that far from Jersey being a benefit to the UK it imposes real cost on it - a real cost that is seen in the suffering of hundreds of thousands of people in this country because that loss is resulting in a  policy that will make them homeless, deny them enough food to eat and result in countless families being broken up.

That's what tax havens do.

That's why I expose what I consider to be their lies.

And that's why I will continue to oppose the sordid trade they and those in the financial services industry who work in them pursue.