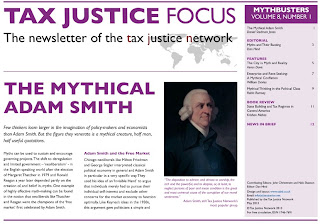 The latest edition of Tax Justice Focus explores and explodes some of the most persistent and powerful myths in contemporary economics.

Earlier this year we teamed up with the New Economics Foundation in London to produce a series of essays - Mythbusters - which are currently being published weekly in the Guardian newspaper, and can be found here on the nef website.  In this newsletter we explore how some of these myths survive and are propagated.

In the opening article Daniel Stedman Jones explores how the ideas of Adam Smith have been selectively interpreted by neo-liberals to shape a particular view of the free market which had little or nothing to do with Smith's own interpretation.

Aeron Davis considers why the media are so uncritical in their coverage of the activities of the City of London, promoting the myth that the City's role is too important to be challenged.

William Davies examines the reality behind the much-vaunted enterprise economy, so beloved of neo-liberals, and argues that much of what is termed enterprise boils down to little more than rent-seeking activity.

And finally, Robin Ramsay asks why myths persist for so long in the political discourse. Does it boil down in the end to the awkward fact that most politicians are economically illiterate?

In addition, Krishen Mehta reviews Aaron Schneider's new book on State Building and Tax Regimes in Central America, and we have a round-up of the major tax justice news stories from recent weeks.

You can download Tax Justice Focus - the Mythbuster edition here, and please feel free to circulate to your friends and colleagues.