The extractive industries and corporate ethics

This is from Prof Paul Collier, currently an adviser to David Cameron on the G8 process, writing in the FT this morning:

I agree. A also agree with this, from the same article:

There are ... lessons for governments of the G8: collectively they must take responsibility for the web of corporate opacity that has enabled such practices. Unreasonable resource extraction contracts have been kept secret, as have payments made by companies to public authorities and officials. Intra-company transactions have been unsupervised and so became the vehicle for tax avoidance. Beneficial ownership of shell companies has been kept secret and so became the vehicle for laundering bribes. If Africa is to harness the coming decade of extraction to finance its development these practices must now be ended. Britain’s G8 summit next month aims to do just that.

Now, let me turn to the Action Aid / Guardian report on tax haven subsidiaries of multinational corporations, published today. Who is right up there, near the op of the charts? A host of extractive industry companies: 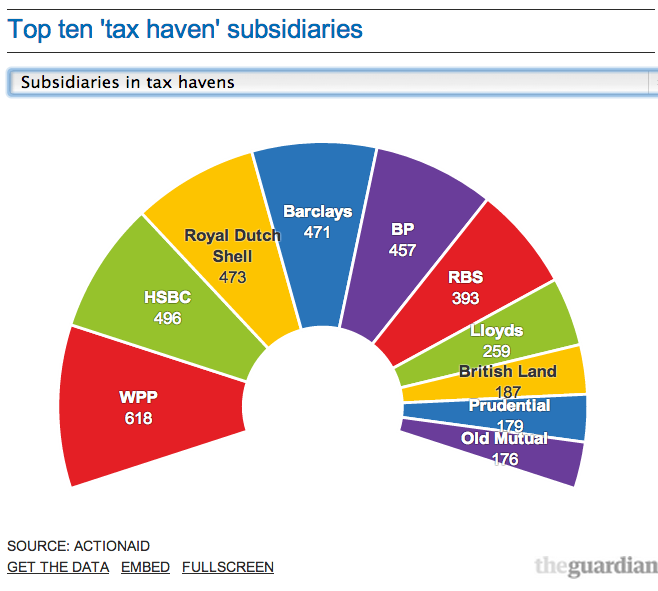 Let's not presume this problem exists amongst some unknown companies.

Let's think it widespread. As the Guardian also notes:

For instance, Tullow Oil, which describes itself as "Africa's leading independent oil company" draws 84% of its revenues from the continent, but only four of the 81 companies it lists as subsidiaries are registered in African countries. By contrast, more than half (47) are registered in tax havens including the BVI, St Lucia, the Channel Islands and Netherlands.

Three-quarters of these tax haven companies refer to developing countries, such as Liberia, Kenya, Malawi and Sierra Leone, in their names.

And that's the problem.

And why we need a moral crusade on tax havens.