I've mentioned one bankrupt idea this morning, and here are some more.

This diagram comes from the New Economics Foundation paper 'Why we need a new macroeconomic strategy': 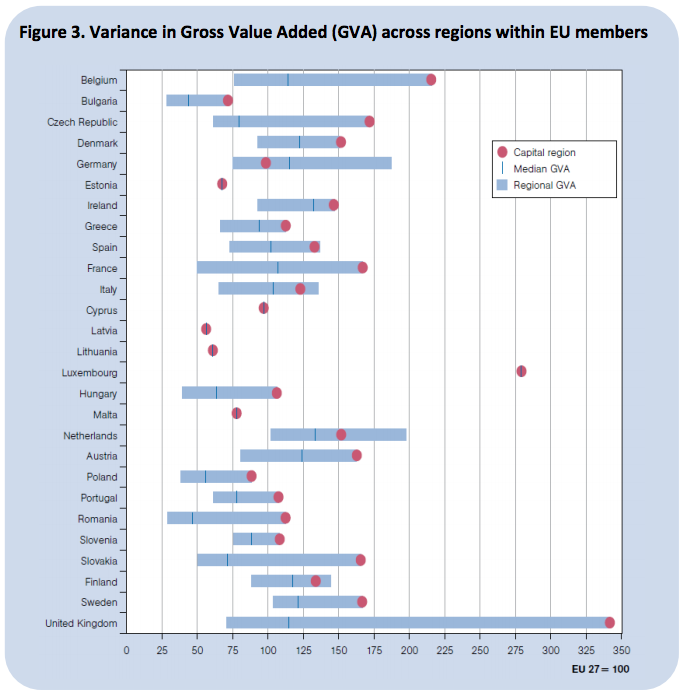 Over time, Britain’s economic landscape has become more and more uneven. As Figure 3 shows, the spread between the UK’s poorest and richest region is now much larger than elsewhere in Europe. Inner London is the richest space in the EU, but the Welsh valleys are poorer than Slovakia. London as a whole is the most unequal city in the OECD.

Growth over the last decade has not helped close this gap. Crudely put, it has been growth of the wrong sort, concentrated in the wrong sectors. Huge expansion in our financial services sector, for instance, has favoured London and the southeast and bypassed everywhere else, with forty five per cent the sector’s output now being produced in London.

So what are the bankrupt ideas?

First, that inequality does not matter. It does.

Second, that trickle down works. It doesn't, very obviously.

Third, that utility is a useful economic concept. It isn't. Distribution matters.

Fourth, that light touch regulation produces favourable outcomes for an economy as a whole. It doesn't.

Fifth, government intervention to correct regional imbalance is unnecessary. It very obviously is.

I think that's enough for now. But I'm open to suggestions.