Heard that countries should “compete” on tax? Wrong. The mythbuster series continues 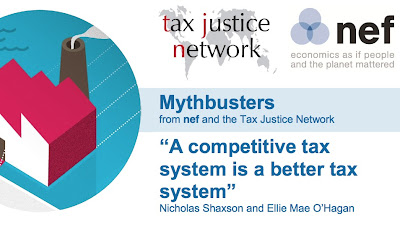 The New Economics Foundation / Tax Justice Network mythbusters series has continued with the next one being featured in an article on tax competition in The Guardian, co-authored by Ellie Mae O'Hagan and Nicholas Shaxson. It's subtitled "Tax 'competition' – in which countries fight to lower taxes – not only hits the poor, it doesn't even help the economy grow." Which is exactly right.

"A myth we're repeatedly told is that a country must be "tax competitive" in order to support a successful economy. It sounds so reasonable. We're taught that competition between companies keeps them on their toes and pressures them to produce better products and services, at better prices.

But here's the problem: competition between companies in a market bears no economic resemblance whatsoever to "competition" between countries on tax. They are utterly different economic beasts."

Now read on. This is one of the most important myths out there on international tax.

The published article is somewhat shorter than the original. Here's one bit that was cut out, but that we'd like to highlight:

"Let’s tackle the economic illiteracy behind those calls for a ‘competitive’ tax system. If you write about it, always put ‘competitive’ in quote marks, to signal that you understand. And when a politician wheels out the ‘C’ word - get them to explain exactly what they mean. Or run for the hills."

Because when it comes to tax competition can only spell one thing - and that's trouble for ordinary people. Only the rich win in this game, and that's precisely why they promote it.