No longer one nation?

The evidence that there are at least two nations, and not one, in the UK is very clear. As Larry Elliott put it this morning:

[A] CRESC study found that there had been no private-sector job creation in manufacturing-rich regions such as the north-east and the West Midlands between 1997 and 2010. What's more, one of the traditional stabilising mechanisms – people moving from north to south – ceased to operate. In the boom years from 1997-2006, 85% of the extra jobs created in London were filled by people born outside the UK.

But let's be clear, that's not all the fault of immigration. The fact is that relocating from the north to the south of the UK, or from Wales and the South West to London, is exceptionally hard. Property costs and the exceptional barriers they impose are just one reason. Those from outside the UK often find these problems easier to overcome.

The result is that, as Larry puts it:

The current government's attempts to bridge the north-south divide look doomed to failure. All but one of the 20 worst districts for hidden unemployment lie north of a line from the Severn to the Wash, according to a study last year by the Centre for Regional Economic and Social Research at Sheffield Hallam University.

And the Tories, of course, do not care about that, and their own policies reveal that:

The economy's structure means that the growth sectors when it recovers are, according to Capital Economics, likely to be financial services, professional services and communications, digital and media. All three are concentrated in London, which also accounts for almost a third of money spent on regeneration projects. The £15bn invested in Crossrail dwarfs spending on infrastructure in the north. Indeed, the £322m earmarked for new rail lines to boost the big northern cities is exceeded by the £350m to lengthen two platforms at Waterloo station. Doubtless many of the commuters who will benefit have a soft spot for Mrs T. But it is easy to see why in other parts of the land she is not seen as an economic saviour.

This is not one nation. As John Harris has noted, that form of Toryism (which had appeal) died many years ago, not least at the hands of Thatcher. I saw that when I was a student.

All of which does at least make it satisfying to note that there is some remaining belief in the idea of a one nation state. As the Guardian reveals in a poll this morning, the people of this country still believe the state has a role: 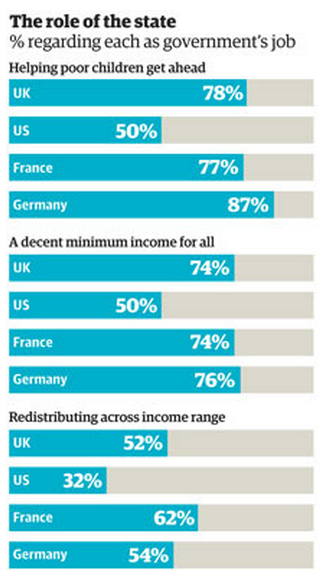 I'm especially pleased to see that redistribution remains a supported objective: it should be.

But eqaully, I wonder what would happen if this poll were run regionally? I have a strong suspicion the South East would not agree.

And that is where our problem lies. Thatcher's children do not believe in compassion and seem to lack the empathy to understand others. And that's why we face the risk of a real national divide.