The Observer's myth busting article on social security yields rewards to those willing to give it the attention it deserves.

It's George Osborne's claim this ast week that large families are encouraged by a 'welfare culture'. But that's a lie. Here's the data: 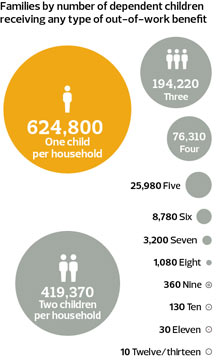 As the Observer says:

To quote the Economist: "Though most of them seem to end up in newspapers, in 2011 there were just 130 families in the country with 10 children claiming at least one out-of-work benefit. Only 8% of benefit claimants have three or more children. What evidence there is suggests that, on average, unemployed people have similar numbers of children to employed people ... it is not clear at all that benefits are a significant incentive to have children."

The Tories would like us to think they're a breed apart. But they're not. They're us. They're literally just a part of all of us.

And we need to say that very loud, and very clear.