nef and the Tax Justice Network have paired up top economists and journalists to write a series of guides exploring the truth behind common economic myths. The first mythbuster, prepared by Howard Reed and Tom Clark, addresses the question: is Britain really ‘broke’?

The answer is, of course, that the UK is very far from being broke. As Howard and Tom put it in the Guardian version of the article:

The defining narrative remains that There Is No Alternative, because Britain is "broke". But can this story be squared with the facts?

The figure below shows that UK debt/GDP was above 80% for most of the last 300 years. Enthusiasts for austerity tend to ignore the vast majority of that timeframe, focusing on the increase in debt from below 40% to around 80% of GDP in the last few years. But If Britain is broke at the moment, then the graph shows that it was also broke for a whole century between 1750 and 1850, and for 20 years after the second world war. In reality, in neither case did the UK default, and reveal itself as bust – both periods were times of investment, growth and national renewal. 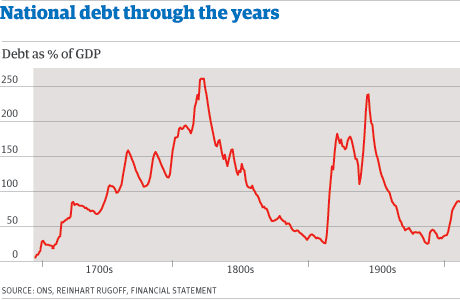 Other advocates of austerity suggest Britain is broke because the cost of servicing debt is bankrupting us. However, UK debt interest payments are now actually lower as a share of GDP than at any point up to the year 2000. So if this is the yardstick for being "broke", Britain has also been broke over the whole second half of the 20th century.

The simple fact is that the claim made is a myth, and that is what the whole series is about.

Mine comes in a few weeks time.