The Guardian has begun a major series today exploring the secretive world of what it still calls offshore.

A decade ago there was almost no adequate theory of offshore. My friend and colleague, Ronen Palan, made a major contribution to this field in his book The Offshore World: Sovereign Markets, Virtual Places, and Nomad Millionaires (and yes, I know that is an Amazon link; time is short). Ronen, Christian Chavagneux and I offered more explanation in our book Tax Havens: How Globalization Really Works. I do however feel my best explanation to date is in a paper I wrote for the Tax Justice Network Financial Secrecy Index project.

The paper in question is called Defining the Secrecy World: Rethinking the language of ‘offshore’. The summary says:

This paper sets out to show four things.

The first is that the existing language of the so-called ‘offshore world’ is inappropriate for the purposes of rigorous analysis of the issues to which that term has been applied. The paper offers a new language for this purpose. In that terminology the term offshore is replaced by the term ‘secrecy world’.

Second, it suggests that the assumption that the secrecy world is geographically located is not correct. It is instead a space that has no specific location. This space is created by tax haven legislation that which assumes that the entities registered in such places are ‘elsewhere’ for operational purposes, i.e. they do not trade within the domain of the tax haven, and no information is sought about where trade actually occurs.

Thirdly, this paper shows that the illicit financial flows that are the cause of concern with the secrecy world do not flow through locations as such, but do instead flow through the secrecy space that secrecy jurisdictions create (secrecy jurisdictions being the new term tax havens). As the paper shows, to locate these transactions in a place is not only impossible in many cases, it is also futile: they are not intended to be and cannot be located in that way. They float over and around the locations which are used to facilitate their existence as if in an unregulated ether. This suggests that any attempt to measure or regulate them solely on a national basis will always be problematic.

Finally, this paper suggests that the change in language that it promotes is consistent with existing understanding of the observed phenomena and adds new dimensions to the lexicon of offshore / the secrecy world. We hope that this new language will allow regulators to extend the scope of their work whilst also reducing the scope for sophistic and casuistic arguments put forward by those who exploit the secrecy world for personal gain.

That paper still underpins much if not most of my thinking on how offshore works, and why it is so dangerous. If you want to go beyond the Guardian series this is where I'd recommend you start, and you'll end up here: 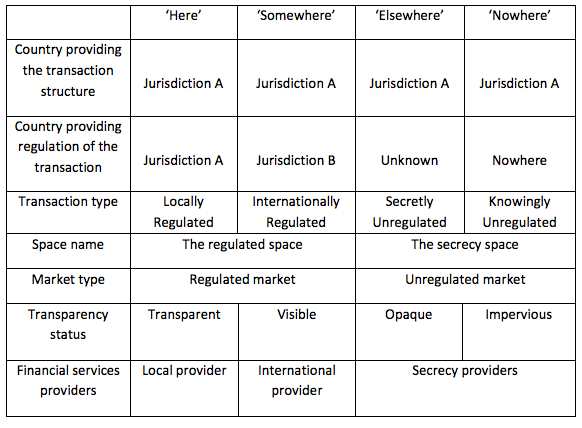 That's how I think it all hangs together. But the key is in the third part of the paper, noted above. It's in the understanding that there is a secrecy space rather than a specific place that does offshore that the answers to this problem will lie.