Every one of the 41,000 tax avoiders identified by the National Audit Office is costing the country Â£248,780 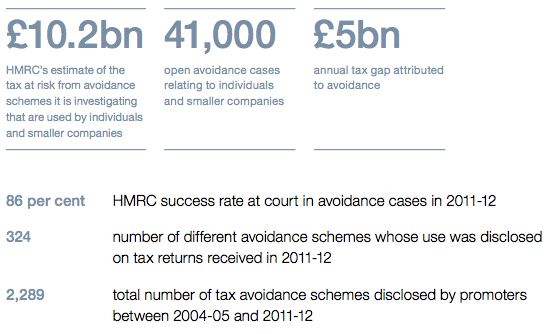 I hate to say it, but I think these facts are misleading.

First of all, the figure for individual tax avoidance in HMRC's latest tax gap estimate is £2.1 billion. It was £1.9 billion in 2009-10, they say. They do not give an avoidance figure for small companies, but total losses to them are only £1.4 billion: by no means all of that can come from these schemes any more than all the losses from individuals can. If that were true the enormous losses from other tax avoidance (let's start with IR35 arrangements, for example) would simply not be in the data at all. But if we attribute half of the HMRC acknowledged losses to marketed schemes we still come up with, for this sector, £1.75 billion of losses attributable, according to HMRC, to such schemes annually. However, with £10.2 billion at risk that is 5.8 years, on average,  of losses still to deal with. And the DOTAS scheme, under which such losses are identified  has only been doing since 2004. That means so far 75% of all identified losses have not yet been addressed.

That's not enouraging, is it?

Now, let's put this in perspective. A senior tax inspector can earn around £60,000 a year - although many earn less. HMRC's accounts show that, at most, staff costs were only half of HMRC spending in 2011-12 (although their accounts are designed to make that as hard to find out as possible). So total overhead costs included a tax inspector costs £120,000 a year. That's half the tax lost to each one of these cases.

Now, doesn't that mean that employing a rather large team of tax inspectors to tackle this problem makes sense?

Why isn't HMRC doing it?

And why, if as the NAO admits, total losses to tax avoidance are much more than those agttributable to such vases, isn't HMRC allocating considerable resource to other abuse as well?

Surely the time has come when the glaringly obvious fact that we can't collect tax without employing enough people to do it has to be recognised?

And at the same time, why not recognise the real true scale of the problem?