What cutting state spending by 5% of GDP will really mean

Aditya Chakrabortty wrote an article for the Guardian yesterday in which he included this chart: 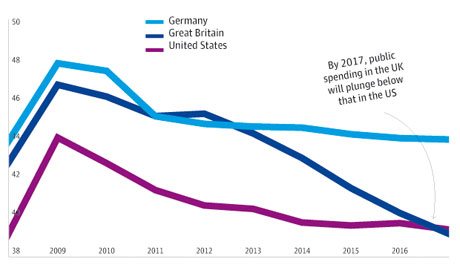 The data comes from the IMF. It shows the planned proportion of GDP to be spent by the governments of the UK, Germany and USA over the next five years, with some historic time data to give the plans some context. As Aditya pointed out, it is the plan of the UK that is quite so extraordinary.

Between now and 2017 the Coalition is planning to cut its spending from about 45% of GDP to under 40%, a figure slightly lower than that in the USA. And remember, it's going to do this at a time when growth is going to be low, as we now know for sure since almost everyone agrees that the impact of the financial crisis will last until 2018.

Aditya is, of course, right to highlight just how aberrational these cuts are. No one has tried to do anything like this before in history; not just here, but anywhere. And Aditya's right to also note that non one can as yet get their heads round just what the impact of this will be on government services and those who rely on the state. But I think there's something Aditya did miss out on - and that's to forecast the impact of this in the light of the IMF's new realisation that right now changes in government spending have a very strong multiplier effect. As they've acknowledged, that effect could be as high as 1.7 times the spending, or cut. I explained what this means, here.

So let's explore this. Each year for five years the government is going to cut what it spends by 1% of GDP. That's near enough, £15 billion a year. In five years time £75 billion will be taken out of the economy each year compared to now.

With a multiplier effect of 1.7 - and there's no reason to think this will change over the next few years as we don't expect any significant increase in growth over that period - that means that in current terms GDP will be 8.5% less in 2018 than now.

Note what I am saying: the government is planning a deliberate, persistent, economic recession at a scale that looks rather like it's their intent to turn it into a depression over the coming five years.

And what will happen if we cut the economy by 8.5%? Of course the poor will be much poorer: that's the only way this result can be achieved. But the impact will be much broader than that. If you cut GDP by 8.5% you can only do that by crashing investment. There is no other way to do it. Cutting investment has a multiplier effect higher than all other multipliers. And it also directly impacts jobs: and this is the key point here.

It does not follow that cutting GDP by 8.5% cuts jobs by 8.5%. Labour only makes up 55% or so of GDP. But given that it is the biggest part of GDP you can't cut GDP by the extent planned as a result of cuts of this scale without impacting jobs either directly, because government spending is cut, or because the recipients of that spending are cut as benefits and other costs are massively scaled back, or because investment is cut.

And since in that environment people will save because they will be living in fear and so business, seeing no prospect of growth, will also not invest, whilst at the same time we can hope from no salvation from overseas where the Eurozone shows no sign of coming out of crisis, then given that none of these other factors that might stimulate GDP (and they along with government spending are the only things that can stimulate it) the impact of cuts is bound to result in significant job cuts.

The UK labour force is roughly 30 million right now. Cut it by a number a little less than 8.5% - let's call it only 5% to be generous and to reflect the part of the fall in GDP that must fall on labour, and maybe 1.5 million or more people will lose their jobs.

In 2009 I said we'd see unemployment of 4 million, at least, in this country if the Coalition got their way.

I still stick by that forecast.

And not one iota of this is necessary. This will be economic havoc imposed by choice, not need. Which is precisely why we need to protest long and very hard about it.