The limits to growth – and a little inspiration

Martin Wolf asks in the FT this morning wheteher there are limits to growth.

He's right to do so. But maybe a little behind the times. I read this book when I was a sixth former in the mid 70s: 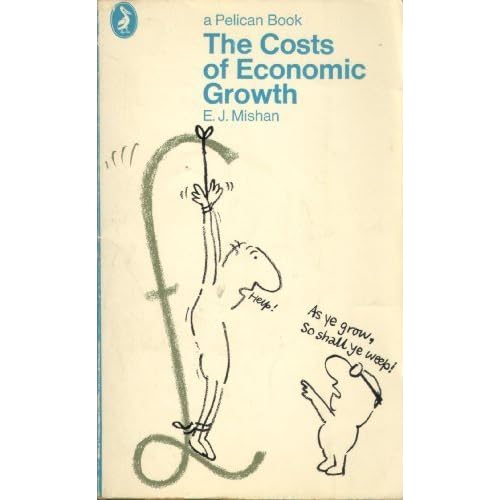 If anything made me green, it did. And my copy looks just as battered as that one now.

OK, there was also Small is Beautiful, but it wasn't as good as Mishan. As Wikipedia notes of Mishan:

In 1965, while at the LSE, he wrote his seminal work The Costs of Economic Growth, but was unable to find a publisher until 1967. In this work he expanded on his original 1960 thesis which stated that the “precondition of sustained growth is sustained discontent”, warning developing nations that “the thorny path to industrialisation leads, after all, only to the waste land of Subtopia”. The Costs of Economic Growth presaged many of the concerns of the Green movement that followed.