KPMG have published their 2012 tax competition report, which looks at how countries compete with each other on tax rates. Their ranking is as follows: 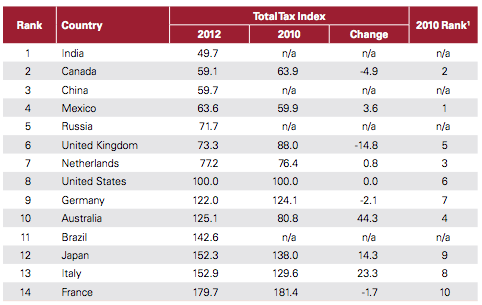 As KPMG's UK head of tax policy Chris Morgan said of the report:

This is good news for UK plc and an endorsement of the government's tax policy. The significant change for the better is partly due to reductions in the corporate income tax rate here in the UK [which has reduced 2% since 2010]. It is also due to lower industrial property values in 2012 which have resulted in a reduced burden for other corporate taxes.

In the process KPMG pin their colours to the mast: low business taxes, which simply increase the massive cash pile big business is already sitting on in the UK, are apparently good things without there being any value judgement on the impact of other taxpayers, the deficit, infrastructure which is gradually collapsing, or long term investment in the well-being of the country.

And look at whose company we are keeping as a result of the direction of travel. Look at the above list. Would you honestly prefer to live in the countries above or below the UK? I think most would say below, and that's because high tax delivers high quality living environments.

It's something KPMG and the neoliberals ignore.

NB: For the record, the UK is not a plc. Nor does any sensible person wish it should ever become one. No doubt KPMG do though