Can you have too many financial services?

This is a question that many reasonable people have asked over recent years. Now it looks like the IMF has done so as well, and has published a paper on the subject.

This paper examines whether there is a threshold above which financial development no longer has a positive effect on economic growth. We use different empirical approaches to show that there can indeed be "too much" finance. In particular, our results suggest that finance starts having a negative effect on output growth when credit to the private sector reaches 100% of GDP.

And which countries are affected? This is the table: 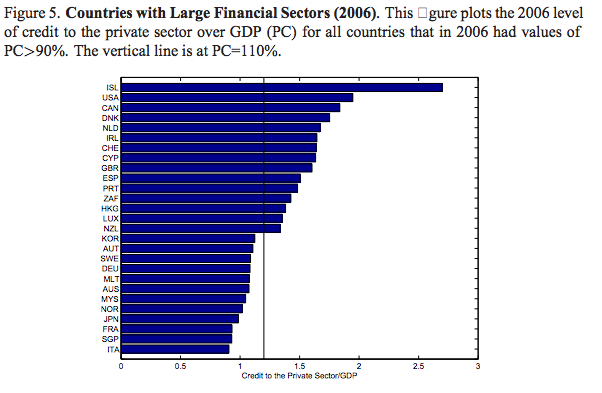 Iceland, USA, Canada, Denmark, Netherlands, Ireland, Switzerland, Cyprus, the UK, Spain, Portugal, South Africa, Hong Kong, Luxembourg and New Zealand. That's not quite a list of those who are now in trouble plus those who put them into trouble, but it's pretty much so. And that's very telling.

PS: Update, Cyprus has just requested a Euro bail out