The Parliamentary Accounts Committee has issued a report saying it is not convinced by HMRC's logic that sacking staff pays. It has said that if it had more staff it would, in the PAC's opinion, collect more tax.

HMRC's response has been quick in coming. They've announced another 1,638 job losses at the following locations: 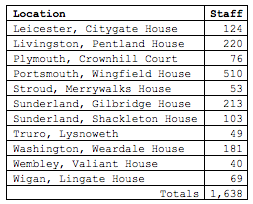 This is tax madness.

It's madness when you realise that these people are paying for the services we're all going to lose in the NHS, schools, social services and in pension and other payments as a result of the fact that they won't be collecting the tax due to meet those needs.

That's why I'm at the PCS conference this afternoon. This is a policy that has to be changed - in the interests of all honest people in this country.