Why HMRC are wrong on the corporate tax avoidance gap

In their report to the Treasury Select Committee on my work H M Revenue & Customs say:

For corporation tax avoidance, Tax Research UK calculates the 'expectation gap'. They describe this as a measure of the difference between the contribution society expects business to make by way of tax paid, and what is actually paid. This is defined as:

the difference between the headline or declared tax rate for companies, and the rate of tax they actually pay.

This means that legitimate use of specific exemptions and reliefs such as capital allowances or double taxation relief, which reduce the amount of tax payable, are badged as avoidance.

This is, with the greatest of respect to HMRC, disingenuous, and they know it. The reason why my estimate of corporate tax avoidance and theirs are so different is that when calculating corporate tax gaps HMRC has started with the assumption that the tax returns it gets are right and avoidance only exists if on investigation of the return an activity is found that they wish to challenge as avoidance. This is what is called a ‘bottom up’ approach to calculating a tax gap. I, on the other hand, started from the accounts of multinational companies and tried to estimate what part of their profit should reasonably be taxed in the UK to estimate a tax gap.

An example helps explain the difference. In April 2012 the Mail on Sunday looked at the accounts of five US internet giants – Apple, Google, Amazon, eBay and Facebook. What they found was that the companies’ American accounts suggested that they had between them total sales income of £12.2billion in Britain in 2010. The Mail then suggested, using a methodology pioneered by Tax Research UK,  that on the basis of their global profit margins it would have implied they should have, if all things had been equal, declared profits in the UK of almost £2.5 billion. UK corporation tax on that sum at 28 per cent (as was due in 2010) would have given them a bill of £685 million. Instead they paid just over £19 million between them in tax in 2010 at an average rate of 0.8 per cent.

It has to be stressed all this is legal – and almost certainly done with HMRC approval – and arises because the companies in question bill their sales to UK customers from outside the UK and their UK operations are simply service functions.  The HMRC approach to tax avoidance would not pick up the difference of £666 million found in these cases. The Tax Research approach would.  Unsurprisingly the figures are very different as a result. The HMRC approach may be to approve what the companies do as being strictly correct but it is very obvious that very few people would think that outcome appropriate and reasonable. The result is that HMRC have dramatically understated tax avoidance in the UK.

Now I don't dispute that using my approach and because of the limitations in tax disclosure in corporate accounts it is not impossible that the exploitation of reliefs allowed by parliament may also be included in my estimate of the tax gap - but I explicitly acknowledge this in my work by looking at the impact of such allowances on deferred tax provisions. It is disingenuous of HMRC to ignore this. And by doing so I showed that capital allowances, which you would logically expect to reverse over time, do not. The aggregate deferred tax liabilities of the top 50 FTSE 100 companies over an extended period looked like this based on my research: 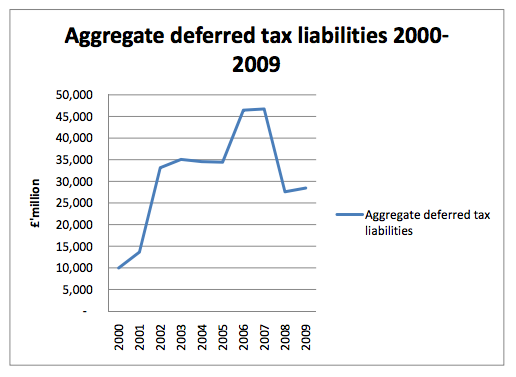 If paying tax late is an objective of tax avoidance - and few would dispute it - then from 2,000 to 2007 large companies got very, very good at it. The situation only change in the crash when massive bank losses knocked about £19 billion of total deferred tax balances. In other words - if we're looking at tax not paid as being tax avoided - and for all practical purposes it is - then those capital allowances HMRC refer to are very useful indeed in making sure tax is not paid.

In that case their claims ring very hollow indeed and their method of calculation simply exonerates corporate tax abuse that seems morally repugnant to most right across the political spectrum.

As such I stand by my claim that my estimate of tax avoidance is far more accurate than theirs.

But whilst they persist with their line no wonder big companies and the tax avoidance profession are now queueing up to say HMRC have got this right.