I have collected data from budgets for many years. It's become something of a habit but I've probably not done enough with that information so over the next week or two, and in the run up to our next budget on 21 March, I thought I'd publish some highlights based on that data from 1997 to 2016. No, I'm not clairvoyant; all budgets include forecast data.

So let's start with some fairly straightforward stuff on GDP. That is gross domestic product and it's meant to measure how big the economy is. Since most Chancellor's have growth as their aim all of them want GDP to grow. However, it is real growth after allowing for inflation that matters, so I have looked at this issue of inflation adjusted growth over that period because it is pretty fundamental to assessing much of what follows.

The data used for this is issued by the Treasury. Forecast data comes from the Autumn statement, published last November. The data on GDP is updated regularly (including past data). That which I have used for the analysis here is the most recent, dating from December 2011. I've adjusted it to consistent 2010-11 prices using the GDP deflators also published by the Treasury and adjusted anticipated growth for forecast inflation. That ensures consistency. The result is that annual growth rates over this period as follows: 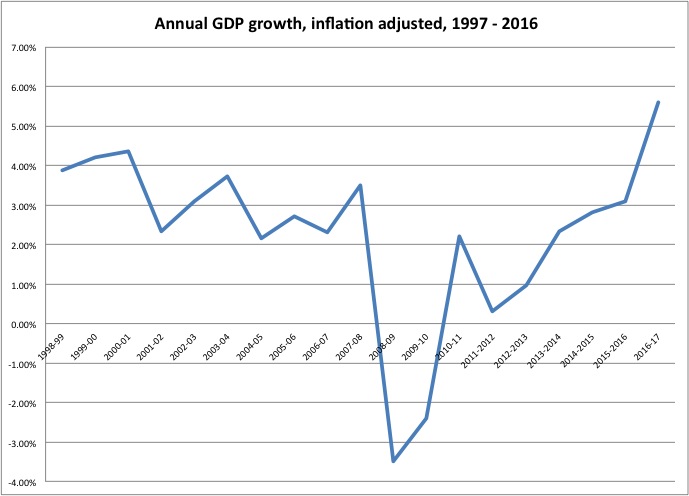 Labour delivered consistent growth from 1997 to 2008. The Tories are also promising that from 2013 onwards. Average growth under Labour to 2008, when it all went wrong, was 3.23% a year. The Tory promise in the final four years of this projection period is, surprisingly, 3.46% a year: they are actually suggesting (in no small part due to the exceptional projection for 2016-17) an overall rate higher than Labour. 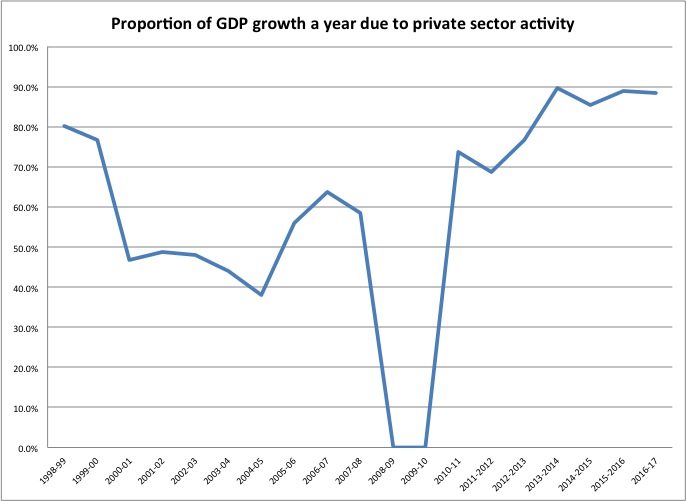 The two years with a 0% were years when there was a fall in GDP.

What this data also makes clear though is that the Tories are now claiming they will deliver average inflation adjusted growth between 2013 and 2017 at an overall higher rate than anything Labour achieved and that rate of growth will be achieved despite the private sector's biggest customer - the state -  shrinking its relative demand. In fact, the higher rate of average growth the Tories are predicting will be overall in the final four years of this projection period be 88.1% down to the private sector. The implict private sector growth required, inflation adjusted, over the whole period looks like this: 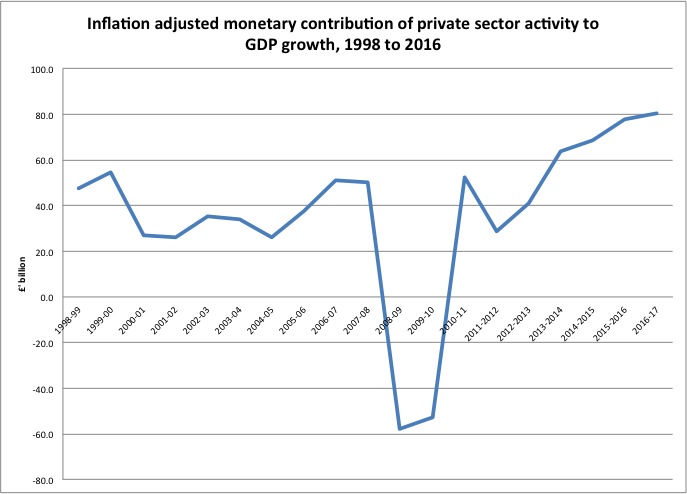 How likely is that private sector growth to happen? Candidly, the reasonable probability is zero. Labour's period from 1998 to 12008 included two booms - the dot.com boom and the boom fuelled by debt from 2005 onwards. There's no sign whatsoever that a boom is going to happen at all. Even if it did, it would have to be a bigger boom than either of those periods of economic hype - both of which ended in tears. And nothing suggests any reason why that should occur. There is no technical innovation on the immediate horizon like the internet. Banks aren't lending. People and companies are saving. There's no indication that any of these things will change, much. A bit maybe; much, not at all.

In that case let's be blunt about the prospect of Tory forecasts  being true: there is not a hope of this growth happening. For Osborne to deliver his plan requires private sector growth rates on a scale the UK has never delivered and is, I suggest, simply unable to deliver.

In  that case the whole of the political opposition in the UK has to point out that he is selling the biggest lie in British political history - which is that he can supposedly balance the UK's budget. He can't on the basis of his current policies. It is impossible.

So it is time to tell this story and say so. Now. He's a phoney, he must know it and we have a duty to say so.