The average rate of return on shares in London in the last 10 years is MINUS 0.1% – so why are pensions invested in them?

The Observer noted yesterday that:

Highly paid City traders are depriving pensioners and savers of thousands of pounds through high management fees that are often hidden, according to leaked advice provided by consultants to the Treasury. The charges are spreading and are so steep that savers may find they get less back in retirement than they invested in savings accounts and pensions over their lifetimes.

This is just about inevitable. Referring to a City of London publication on the equities market, produced in October 2011, shows that the average rates of return on equities have been as follows: 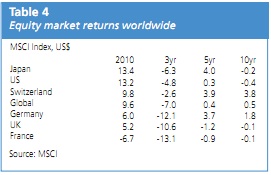 Pension saving is long term. Over the long term the returns, expect in the small German market and even smaller Swiss market, have been negative. Globally they are 0.5%. Annual pension charges are at least 1.5% in most funds. After dealing costs absorb returns they rise well above that.

As I have argued in People's Pensions in 2003 and more recently in Making Pensions Work, investing pension money n equities did not in 2003 and still does not now make any sense at all. Losses are virtually guaranteed and the City rakes off billions - in my estimate up to £30 billion a year from pension funds - for the privilege of losing it for the ordinary people of this country. This is blatantly capturing the benefit of the common good of pensions for the benefit of a few. No wonder, as I showed in Making Pensions Work, that this industry is incapable of generating any returns at all to pay pensions - which is why all pensions in this country are currently effectively paid for by the state when the cost of pension tax relief is taken into account.

The disaster is that in 2013 millions more people will be compelled to throw money at the City each month. The National Employment Savings Trust - designed in 2006 in another economic era - is intended to force low paid employees to give 4% of their earnings to the City to lose for them month in and month out from 2013 onwards. This will be a disaster for the economy where enforced savings is currently the last thing we want, and it will be a disaster for these savers.

I have met this fund and they refused to consider the alternative of a fund invested in infrastructure as I have proposed. Conventional wisdom has to be followed they say. Which means that these people will be ripped off as are almost all pensioners now, and all to benefit the 1% in the City.

When will we stop this pensions madness?