When the FT says that Greek exit from Euro will lead to streets exploding and failed economies, worry that we’re on the road to war

This is the first of a four part interactive diagram in the FT this morning. It's stunningly important, because it shows, literally graphically, the scale of the issue we are facing in Greece. I urge you to look at the rest. If anything it is more powerful: 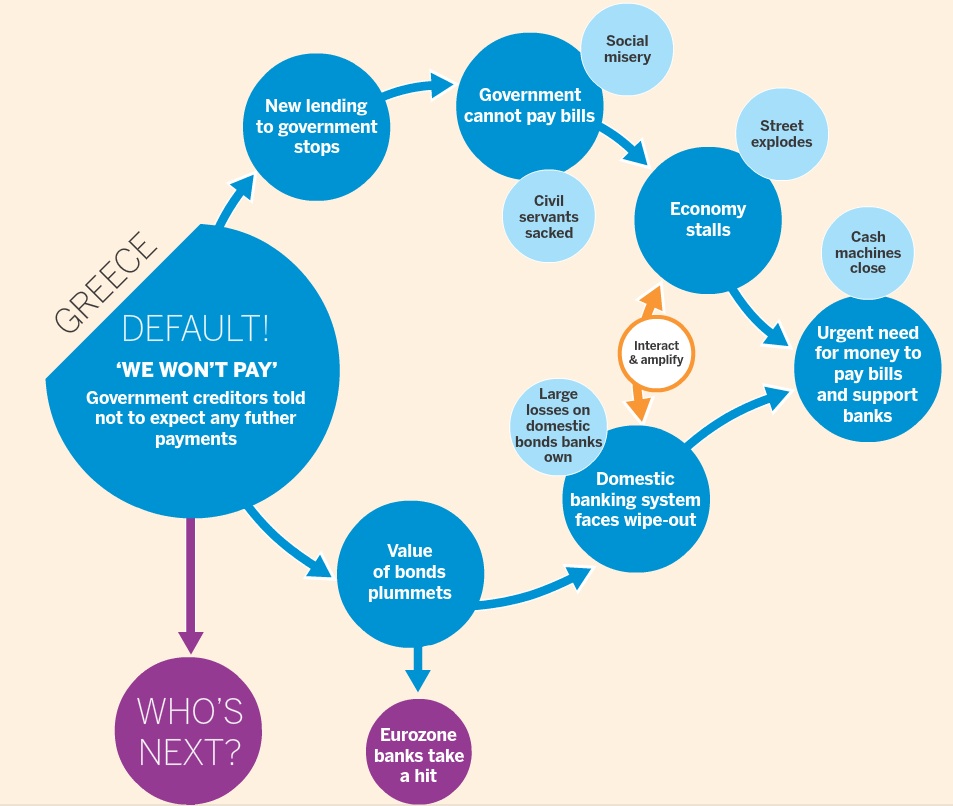 Look what the FT is saying (and with which I concur). It's suggesting that the path down which Greece might be forced leads to complete economic collapse, social chaos, the streets exploding and more.

And it makes clear that if others have to follow (and if Greece goes the dominoes will be falling) then the contagion spreads.

Then it will not just be streets exploding. Extremism will fill the void that neoliberal failure will have created, and that extremism will, inevitably be nationalistic. There is an inevitable consequence to that given the stresses that will exist. We have to be realistic: the choice now is whether or not we start down the road to war, or not.

We have faced such crises before, the only difference being this time it has arisen because of economic failure and not because of war. The precedents were in 1919 and 1945. In 1919 the decision was to divide Europe, and to punish those seen to be at fault. We got fascism, world war, dictatorship which was not finally eliminated until 1989 and outright disaster for Europe.

In 1945 the West, at least, made a different choice. It decided that it would work together despite crippling debts to build a vision of a shared Europe, and that's what the Marshall Plan delivered. It also delivered peace.

We face that choice now. I am not overstating my case that the choice now is the path to war or peace.

Surely there is only one option?

The FT does, I think, know this. But will our politicians see sense and realise that we're not just chooosing chaos for a few Greeks now - we're consigning European unity to history if we don't solve this crisis now.

And we can solve this crisis. It needs money printed. It needs economic stimulus and investment, now. It needs a plan for recovery, now.  That will, I accept, devalue the wealth of some in Europe. But surely a little redistribution of wealth now is worth it? The alternative is modern war in Europe in my opinion - and I can, as a human being, as a father, as a compassionate person, imagine nothing worse.

And I think I have a duty to lay my concerns on the table.