I get so bored of Tories talking about debt

I admit I get really bored of Tories talking about the government's debt.

Take this from new Tory MP Sajid Javid in the Telegraph a day or two ago:

Over the past decade, our net public debt has rocketed from £312 billion to £920 billion (or from 31.5 per cent of GDP then to 60 per cent now). This happened because Labour chose the easy way out instead of trying to find solutions to the long-term challenges facing the public finances. It believed that the answer to every problem was to spend more money: so budgets and debt soared.

Now that's complete nonsense. This is what actually happened on debt excluding interventions in banks: 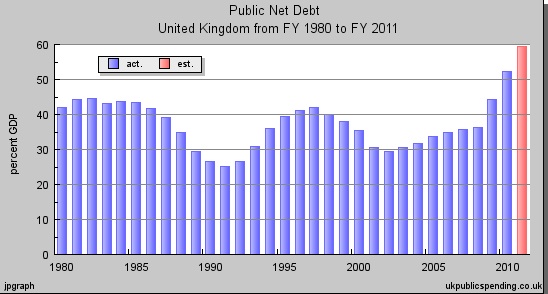 If we take 2001 to 2007 as the years for which labour was wholly responsible - i.e. after the Tory policies had washed out of the system and before the worldwide crash - then debt as a proportion of GDP was very obviously much lower as a proportion of GDP then during most of Thatcher's era and way better than much of Major's period in office.

Of course debt went up in 2008 and onwards - but unless Tories wanted the economy to have been destroyed, as I explained would have happened if Labour had not acted here today - then first Labour had to bail out the banks and second bear the costs of the crash which was the sole cause of the resultant increase in  debt which was not and never could have been Labour's fault.

So what word describes most accurately the Tories' claim? Does 'lies' work for you? It does for me.