The £19 billion tax subsidy for banks

The report I have written for the TUC on the corporate tax gap, published today, highlights three key issues.

The first, and the headline maker for all the papers, is the tax subsidy that the UKs High Street banks — Barclays, HSBC, Lloyds and RBS, are to receive from the taxpayer over the next few years.

As I note in the report:

The most notable feature of the bank’s reporting over the period surveyed from 2000 to 2009  is, however, the movement in their deferred tax reserves. In aggregate for all the banks in question (HBOS again being the exception in 2000 and 2009) these balances were as follows: 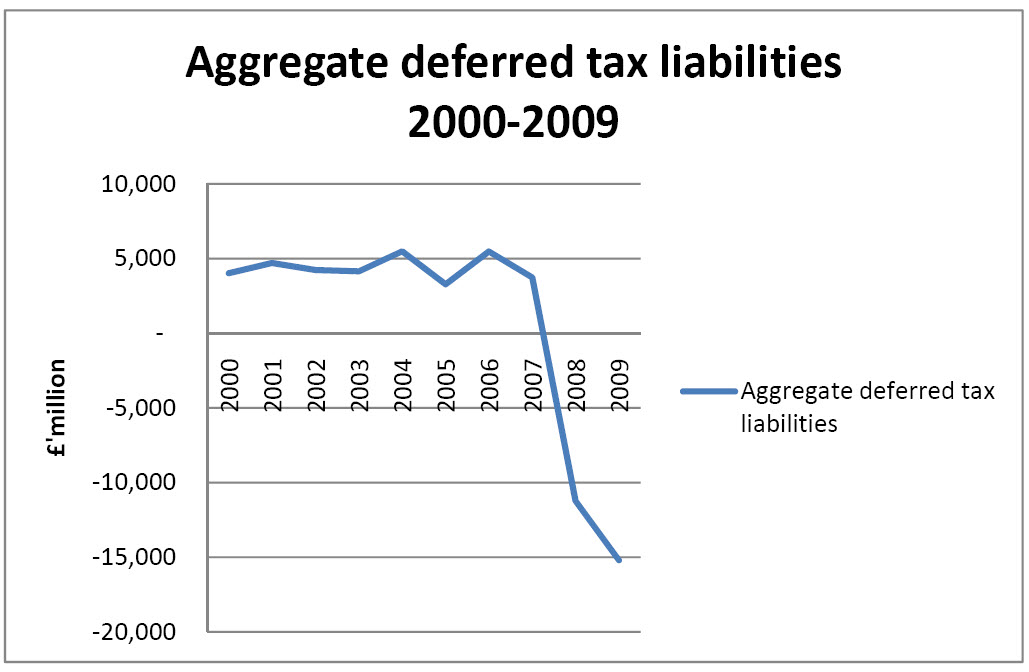 From dominating the overall deferred tax balances of the whole sample in 2000 these banks saw remarkably little increase in their deferred tax liabilities in subsequent years (in itself a matter for further investigation, and not considered here) before their situation suddenly changed in 2008 to being in a position of having substantial deferred tax assets. In total, £14.9 billion of the £19.1 billion increase in the total aggregate decline in deferred tax liability balances of the top 50 companies in the FTSE between 2007 and 2008 was caused by these banks alone. Their deferred tax assets increased again in 2009, the total movement between 2007 and 2009 by then having reached the sum of £18.9 billion. The overall decline in deferred tax balances of the whole sample over this period was £18.3 billion.

The causes for deferred taxation balances are numerous, and not all deferred tax assets relate to tax losses (some can, for example, relate to pension payment provisions for which tax relief has yet to be given).
However, the exceptional move in these banks’ deferred tax balances between 2007 and 2009 cannot have been caused, overall, by anything but the expected future benefit they believed might arise from the accounting losses they had suffered, and which had yet to be recognised for tax purposes although they had been included in their accounts.

If some £19 billion in tax might not be paid as a result at some time in the future, there is an extraordinary double subsidy going on for these banks. Not only were their losses underwritten by the state in 2008 (and in most cases they still are receiving some form of state support, if only by way of asset guarantees), but they will now receive a second round of subsidy when over years to come they will offset those state subsidised losses against the profits they might now make only because they have been saved for the benefit of their shareholders by the UK government.

Of course, not all the tax offset will be in the UK. These are multinational banks and not all their losses will arise in the UK. But there is some evidence that banks have been transferring losses into the UK precisely because of the generous way in which UK tax relief works.

In this case the question must, and should arise, about the alternative tax contribution banks can and should make if their corporation tax payments will be substantially lower than might reasonably be expected in years to come. This is especially true as it seems likely that no other corporate sector enjoys anything like the tax benefit that banks now do as a result of losses that this bailed out sector seems to benefit from.

The options available are that the banks in question might continue to pay bank bonus taxes, or pay a financial transactions tax, or have their right to carry tax losses forward limited so that they expire after a limited period if not utilised by that date, or a combination of all these factors, and maybe others.

What is clear is that the proposed bank levy now being considered will make little difference to the overall contribution these banks will make to the cost of remedying the current crisis, not least if their tax payments in the UK are reduced to anything like the extent their deferred tax assets might suggest likely.

As a result, action is now needed to ensure that banks contribute through their tax payments to government to the extent most in the UK would expect so that as cuts begin to impact on the UK economy as a whole they are seen to be bearing their fair share of the burden for the consequences of their past profligacy and recklessness. Without such action this will not happen, and that is unacceptable.

Today in the press - RT?Ã¢ News